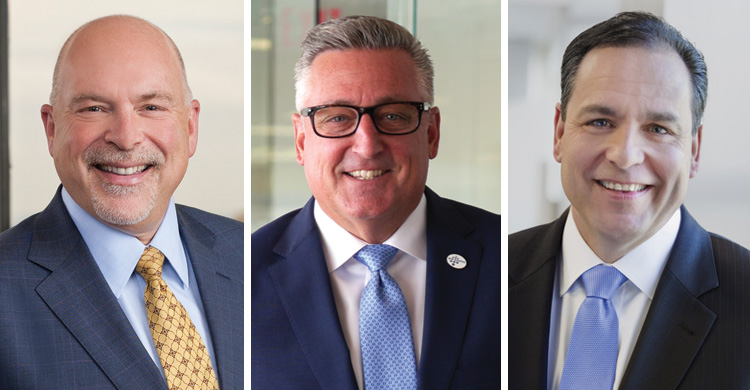 Was there something in the water in Castleman?

Joking aside, the School of Engineering’s main classroom building produced an unusual number of CEOs from chemical engineering in the early ’80s.

At least three have become leaders of industry. Two are CEOs and one is a managing partner in a large law firm. That’s a relatively large percentage of their graduating class.

Well, Mark Vergnano ’80, Frank Bergonzi ’83, and Michael Cantor ’80, ’83 JD say it was the combination of UConn’s top-notch engineering professors, a rigorous course load, and the discipline to handle it.

“What led to my success was the opportunity to take a lot of different types of engineering courses: physical, chemical, organic, thermodynamics, and civil. And you’ve got to be proficient in math. It was a great foundation for a lot of the things that go into running a business,” said Bergonzi, CEO & President of Azelis Americas.

The three leaders remember the chemical engineering curriculum being so difficult that their entering class of 100 whittled down to 34 by the time they graduated.

Bergonzi remembers the first day in his chemistry class in a big hall full of students.

“The professor said, ‘Look to your left. Look to your right. One of you won’t be here in a year,’” he said.
They got through the four years by forming study groups, spending a lot of time in the library, and dedicating themselves to studying.

“Engineering to me is a discipline about discipline. It’s about logic, and running a business is very logical,” said Vergnano, President and CEO of The Chemours Co., a global chemistry company.