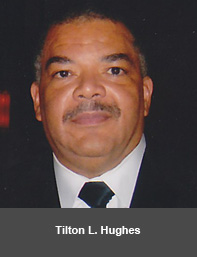 Across his 40-plus year career, which immersed him in some of the world’s most advanced technology companies, UConn engineering alumnus Tilton L. Hughes (B.S. Mechanical Engineering ’73) has learned some valuable lessons that he is happy to share with young engineers just starting out in their careers:

Indeed, Mr. Hughes is anything but ordinary.  The eldest of nine children born to a close-knit African American family in Bridgeport, CT, Mr. Hughes showed an early interest and aptitude in math and science.  “I was always in science fairs, working on a science projects or experiments,” he recalls.  Standardized tests confirmed that young Tilton possessed strong math and science skills, pointing him to engineering as a possible career – a discipline he admits he knew virtually nothing about before deciding to pursue it.

His ambition to attend college was nurtured vigorously by his family.  “My parents always had a clear focus on the need for a quality education and the important of a college education; there was never a question of the need for proper study habits, good grades, and getting that college degree.”  When the time came, he applied to UConn and Drexel University but elected to attend UConn, his top choice.

Mr. Hughes arrived on the UConn campus during the summer of 1968 as a participant in a special summer program for non-traditional students. His high school grades didn’t quite meet the requirements for entry into the engineering program, so he spent two years tackling general education and core engineering classes as an undeclared major, proving his mettle and building a foundation for his later acceptance into the program. He recalls that he learned of his acceptance from Dean of Engineering Peter McFadden, who personally shared the good new one day during Mr. Hughes’ sophomore year.

What was it like to be a young African American student on the UConn campus during the tumultuous late 60’s and early 70’s?  “I commend the university for being proactive with programs like the summer program, dedicated housing for African American students on the fifth floor of Buckley Hall, focused tutoring, and for having zero tolerance for racially related incidents on campus,” he remarks.  “However, our country in 2011 is still struggling with race and in my freshmen year there were fewer than 100 African American students on a campus of 10,000.  I would leave my dorm in the morning and not see another African American person again until I returned for dinner. The experience built character and helped me focus on the task: to obtain a degree.”

Besides many friends from the fifth floor of Buckley, Mr. Hughes also recalls two professors and an upper classman who made a particular impact on his education: Drs. Kurt Marshek (Mechanical Design) and Barry Lubin (Heat Transfer and Thermodynamics) for their interactive approach to nurturing learning, and Quincy, for his tutoring.

Even then, college was an expensive investment, and as one of nine children, it was crucial for Mr. Hughes to obtain scholarships and aid.  The summer program allowed him to bypass many of the high costs, and he was able to secure financial aid, student loans, and work-study that further alleviated his financial burden.

After earning his B.S. in 1973, he joined General Electric, which recruited him to work in the company’s Power Generation Group at the Schenectady, NY plant.  He was immediately enrolled in the Engineering Management Program (EMP), a two-year rotational training program in which engineers were embedded in different divisions of the group to learn different aspects of the operation.  He did three rotations in Schenectady that allowed him to develop a deep understanding of large AC motors, large steam turbines, and gas turbines.  He was then relocated to the nuclear energy division in San Jose, where he gained experience working on the emergency core cooling systems (ECCS) and fuel bundle design areas.  The so-called “ABC course” also enabled him to earn an M.S. degree in engineering from the University of California at Berkeley.

At the conclusion of GE’s intensive training and degree program, Mr. Hughes says, “I was very confident that I could handle any engineering assignment.”  His tenure with the company came to a close in 1977 in the wake of concerns about nuclear energy safety, but he was soon recruited to join IBM.

His early years with IBM were spent in the General Products Division (GPD), where he worked on disk storage technology and, in particular, the IBM 3370 Direct Access Storage Devices (DASD) that, he notes, were early forerunners of the common computer hard drives.  After a stint in new product development, he moved to the manufacturing side as lead process engineer for the head/arm assembly process.  Mr. Hughes then joined the company’s management team and provided oversight in the thin film head area, head/arm assembly, slider fabrication and thin film head fabrication. “The batch fabrication technique used many of the techniques found in semiconductor processing, like photolithography, vacuum deposition and etching,” he notes.

Later, as a program manager on IBM’s corporate manufacturing staff, he participated in the development of manufacturing position papers and studies for the management committee and monitored the implementation of strategic plans in the areas of Six Sigma, continuous flow manufacturing (CFM), market-driven quality (MDQ) and manufacturing consolidation. For this assignment, he traveled extensively to IBM facilities in Scotland, Japan, Australia, Mexico, Brazil and Argentina.  The experience “provided valuable lessons in currency exchange issues, balance of trade concerns, cultural differences in conducting business meetings, labor training, supplier logistics and foreign tax considerations. These are ‘must-have’ experiences in the global workplace,” he remarks.

Another career move led him to Applied Materials, a world leader in the manufacture of wafer fabrication systems for the semiconductor industry, which recruited him for assistance in ramping up their global manufacturing capacity at the Austin, TX facility.  There, he held various executive positions in the areas of manufacturing, logistics, and site management.  He developed and implemented the lean manufacturing strategy for the Metal Deposition (MD) group, leading to a 30 percent reduction in cycle-time along with a 50 percent savings in inventory, a 35 percent savings in space, and a 30 percent reduction in workload. Mr. Hughes notes that he also led the construction, fit-up, and start-up of the $64 million MD manufacturing facility.

Now retired, Mr. Hughes lives with his wife, Gloria, on beautiful Lake Travis in Austin, TX.  He has two daughters: Krystle, who earned her degree in business administration and works in marketing, and Tia, who is completing her degree in psychology.  Mr. Hughes still has roots in Connecticut, despite being away from his home state for so many years, for his mother and four brothers continue to live in Bridgeport.