By Colin Poitras for UConn Today 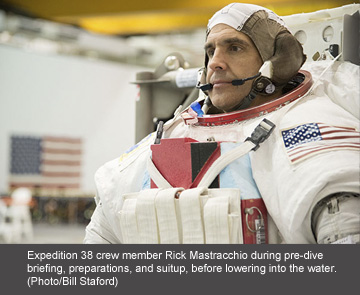 NASA astronaut and UConn alumnus Rick Mastracchio ’82 (ENG) is making his fourth trip to the International Space Station in a few weeks. While the destination may be a familiar one, this mission marks the first time Mastracchio is flying aboard a Russian Soyuz spacecraft to get there.

Mastracchio will serve as a flight engineer for space station Expedition 38, which launches from the Baikonur Cosmodrome in Kazakhstan on Nov. 6. Unlike past trips, in which Mastracchio flew into orbit aboard one of the U.S. space shuttles and stayed in space for a just a few weeks, Expedition 38 is a prolonged space flight during which Mastracchio and the other astronauts will remain aboard the International Space Station from November to May 2014. 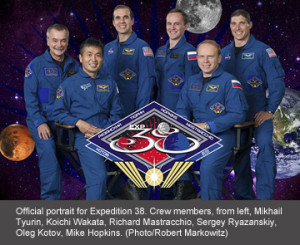 It’s a familiar homecoming for one of UConn’s most popular alums. Mastracchio helped prepare the International Space Station for its first human inhabitants when he first ventured into space in September 2000. Each time he returned (2007, 2010), he said the station seemed to get both bigger and more crowded. Once a small, cramped orbital docking station, the International Space Station is now a full-fledged flying laboratory the length and width of an American football field, including the end zones. It has the same living area as a five-bedroom house, two bathrooms, a gymnasium, and a 360-degree bay window. It weighs almost one million pounds or the equivalent of 320 automobiles.