Alumnus Brian Leshko (M.S., Structural Engineering ’90) recalls the moment he knew he wanted to be an engineer.  “I remember misspelling the word ‘engineer’ in a spelling bee,” he says.  “I looked up the proper spelling and definition and told my parents that, although I couldn’t spell ‘engineer’ correctly, one day I was going to be one.”  Brian’s subsequent career demonstrates the extent to which he has fulfilled that childhood dream.  Brian has been working as a 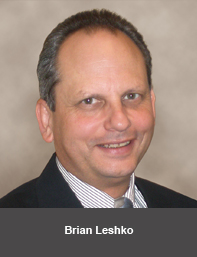 n engineer for the better part of the past 30 years, a career that has brought him all around the world, from Greenland to Africa to Las Vegas, and culminated in his current role as a Vice President at HDR, Inc., one of the leading engineering and design firms in the country.

Brian began his engineering career at the United States Air Force Academy, where he received a B.S. in civil engineering in 1985.  From there, he was assigned to the 820th Civil Engineering Squadron (Heavy Repair) with the U.S. Air Force, where he worked as a design engineer, resident engineer and project manager.  “I developed plans, specifications and cost estimates for new construction, alterations, maintenance and repairs, and conducted project site visits and authored engineering feasibility studies,” he says.  “My workload included design and management of projects valued at $1.2 million.”  After this initial assignment, Brian was assigned to the 4700th Operations Support Squadron, completing a one-year remote assignment at Sondrestrom Air Base in Greenland.  There, he was a Quality Assurance Evaluator and certified the completion of civil engineering projects.  “I accepted the newly constructed North Warning System facilities in arctic Alaska and Canada for the U.S. Air Force and Canadian Armed Forces,” he explains, detailing one of his specific assignments.

His next assignment was to pursue an accelerated, one-year master’s degree in structural engineering at UConn from 1989-90, supported by an Air Force Institute of Technology Fellowship.  The accelerated pace, he explains, was driven by his need to return to the United States Air Force Academy as an Instructor in the Department of Civil Engineering before the program underwent a scheduled ABET accreditation visit.  His attendance at UConn did more than just prepare him to teach, however.  “The coursework at UConn provided my first exposure to analyzing and designing bridges and has led to my continuing passion for bridge engineering,” he remarks. 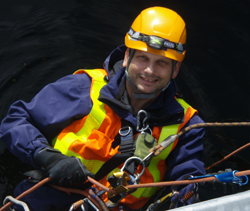 Brian remembers the impact certain professors at UConn had on him and his future career.  Dr. Michael Accorsi (CEE), his academic advisor, in particular, stands out.  “Dr. Accorsi taught me Numerical Methods for Applied Mechanics and Finite Element Analysis for Structural Engineering and patiently helped me learn FORTRAN and master computer programming.”  More important, Brian says, “Dr. Accorsi inspired me to be successful.”

After attending UConn, Brian returned to the Air Force Academy as an instructor of civil engineering and cadet advisor until his honorable discharge from the Air Force in 1992.  At that point, he returned to college yet again, this time to pursue a Master of Civil Engineering degree in Structural Dynamics from The Johns Hopkins University, which he received in 1993.  His degree program was supported by a Federal Highway Administration Eisenhower Transportation Fellowship that enabled him to study non-destructive evaluation techniques for bridges.  This experience set the stage for his 20-year career as a bridge engineer, focusing on the inspection and rehabilitation of the nation’s infrastructure, he says.

Today, Brian is a Vice President, Senior Professional Associate, and Bridges and Structures Inspection Management, and Operations Program Leader at HDR, Inc.  “I have experience developing bridge plans and specifications, bridge analysis and ratings, and bridge inspections and cost estimates,” he says.  As a program leader, Brian’s responsibilities include providing inspection and rehabilitation studies; evaluating newly developed inspection, management, and monitoring technologies; and overseeing the planning, maintenance, and delivery of services to clients.  “In addition, I serve as a Project Manager of several bridge inspection contracts and on-going research projects for the Federal Highway Administration,” he explains.

In his position at HDR, Brian is especially proud of his development of a bridge inspection program.  “I built a Top-5 National Bridge Inspection Program from a core cadre of six bridge engineers and inspectors into a highly trained group comprising 75 staff supporting numerous bridges and structures inspection contracts nationwide,” he says.  Brian has also been recognized by his peers as a leader in the structural engineering profession.  He was recently named an Inaugural Fellow of the Structural Engineering Institute (SEI), an honor that acknowledges distinguished SEI members as leaders and mentors in the field.

When asked what counsel he has for UConn engineering students, Brian responds with advice that has helped him develop his own long and very successful career.  “Challenge yourself to be the best possible engineer,” he says.  “Set lofty goals, for if you strive to attain them and come up a bit short, you will still have noteworthy achievements.  Get involved and learn to network, a skill that will be useful throughout your career.”  Most important, he says, “Be passionate about your chosen profession.”