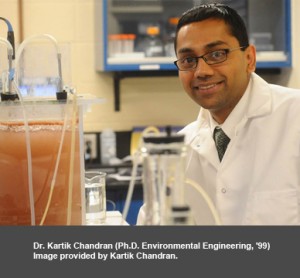 When one thinks of ways to ease climate change and develop sustainable fuels, using waste and sewage is probably not the first idea that comes to mind.  For Dr. Kartik Chandran, a UConn alumnus (Ph.D. Environmental Engineering, ’99) and associate professor of Earth and Environmental Engineering at Columbia University School of Engineering and Applied Science, however, it is something he thinks about every day.  The greenhouse gases that cause global warming come from multiple sources.  One of these sources is wastewater treatment plants (WWTPs), which, while processing sewage, produce a significant amount of nitrous oxide (N2O), a greenhouse gas 300 times more potent by mass than carbon dioxide.  In addition to working to reduce the N2O footprint, Dr. Chandran is also working to make WWTPs run more efficiently and to use the wastewater to generate biofuels.  “My group focuses on energy efficient and cost efficient wastewater treatment,” he says.

Dr. Chandran’s work revolves around the nitrogen cycle.  “The nitrogen cycle is way out of balance in terms of sustainability, primarily due to the excessive dumping of nitrogenous compounds into the environment and then continuing to produce nitrogenous fertilizers from atmospheric nitrogen rather than recovering the nitrogen in the waste streams,” he explains.  He says the goal of his research is to repair that cycle, making sure the right reactions are taking place in man-made environments and recycling the nitrogen whenever possible.

One of the main goals of wastewater treatment is to remove ammonia from the water.  Many WWTPs now employ a process that converts this ammonia to atmospheric nitrogen, but a major byproduct of this process is N2O. Through his research, Dr. Chandran aims to “develop biological wastewater treatment processes that lead to improved water quality as well as air quality.”

To effectively reduce N2O emissions, however, it is necessary to know how much N2O is produced by WWTPs.  To do this, Dr. Chandran has developed a protocol for measuring N2O emissions.  “We were one of the first groups in the world to focus on this issue in a systematic fashion, and my group developed the first EPA-endorsed standard protocol to perform such measurements,” he says.  “We have found that the contribution of wastewater treatment plants to the N2O footprint is the equivalent of anywhere from a million to a 100 million cars in the United States alone.”

The usefulness of these methods does not stop with nitrogen removal.  Dr. Chandran has found that some of the bacteria used in the nitrogen removal processes can also help reduce the carbon footprint of WWTPs.  “We employ the same bacteria that oxidize nitrogen to non-specifically convert methane (a greenhouse gas) into biomethanol (a green fuel), which can also be used to clean up polluted wastewater streams.  Thus, using our technologies, it is possible to convert wastewater treatment plants into ‘biorefineries’ engaged in resource recovery rather than mindless ‘treatment’,” he says.

Dr. Chandran credits his Ph.D. advisor, former UConn Environmental Engineering professor Barth Smets with introducing him to the need for processes that reduce and remove excess nitrogen from the environment.  “One of the first projects that I worked on, starting during the fall of 1997, was on improvements to the design and operation of a biological nitrogen removal plant in Connecticut and this really set the tone for my research and technology development that I do currently.”  He says that his time at UConn prepared him well for his work today.  “My years at UConn created the foundation for a lot of work that I do now and the concepts, ideologies and work ethic that I learnt while at UConn permeate my activities even today.”