UConn, home to the nation’s foremost center on hardware security, and Comcast today announced the establishment of a new Center of Excellence for Security Innovation (CSI) on the University’s main campus in Storrs.

The center unites the expertise of researchers within UConn’s existing Center for Hardware Assurance, Security, and Engineering (CHASE) and Comcast’s leadership in Internet systems security to develop robust detection systems and analytical tools to ensure that the computer chips and other hardware components vital to Internet broadband systems are shielded from malicious attacks, unauthorized access, and faulty or counterfeit products.

“This new Center of Excellence for Security Innovation further establishes UConn as a national leader in hardware security analysis and technology,” says Kazem Kazerounian, dean of UConn’s School of Engineering. “It is yet another example of how academic-industry partnerships can advance science, improve people’s lives, and create a new generation of highly-skilled workers prepared to resolve the technological challenges facing our nation and world today.”

“UConn’s leadership in hardware assurance research is well established and we envision the Center of Excellence will be supported by significant, multi-year funding for research initiatives, joint innovation, and the development of the next generation of technologists,” says John Schanz, executive vice president and chief network officer of Comcast. “While many of those research projects will be sponsored by Comcast, we also anticipate research funding and support from the federal government and other industry partners.”

Officials announced the new Center of Excellence in Security Innovation, to be located in the Information Technologies Engineering building, during a break in a two-day national conference at UConn on secure/trustworthy systems and supply chain assurance sponsored by CHASE. Connecticut Attorney General George Jepsen was among those attending the announcement.

“The Internet has transformed our lives and the way we do business,” Jepsen said. “At the same time, we’re experiencing widespread and more frequent cyber attacks and data breaches that have resulted in the loss of sensitive personal information or put it at risk.” 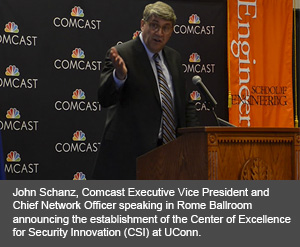 Connecticut reported 427 cyber security breaches last year that threatened the personal information of 580,000 Connecticut residents, or more than 16 percent of the state’s population.  “Those are serious numbers,” Jepsen said. “The cost to the individuals and businesses involved in these breaches is enormous.”

UConn Provost Mun Choi says the unique public-private partnership behind the new Center of Excellence for Security Innovation combines the strengths and resources of a major research university like UConn with those of a major industry leader to tackle real world problems.

“In this very interconnected world, we have to be worried about sabotage. We have to worry about errors,” says Choi. “Universities must work collectively with industry partners…This collaboration will enable our faculty to work on relevant problems, train our students, and make an impact in the marketplace. Today, two great organizations have come together…and when it comes to hardware security, the University of Connecticut, Comcast, and all of our partners will make an important impact.”

As part of the new initiative, two UConn Ph.D. candidates will have internships with Comcast this summer, according to Myrna Soto, chief information and infrastructure security officer for Comcast. “They have already learned a great deal about our hardware, our assurances, and the security framework we’re working toward,” Soto said. “I have no doubt they will be significant contributors from day one.”

The Center of Excellence expands the longstanding relationship between Comcast and UConn’s School of Engineering. Comcast is one of the founding members of CHASE, which also lists the U.S. Department of Defense, National Science Foundation, and industry leaders such as Honeywell, Samsung, and CISCO as sponsors.

“UConn’s CHASE faculty is eager to work with Comcast and other industry leaders in developing robust, secure, and trustworthy hardware technologies and detection techniques that provide unprecedented assurance in today’s rapidly evolving hardware environment,” said Mark Tehranipoor, the director of CHASE, who will also serve as director of the CSI.

Comcast Cable is the nation’s largest video, high-speed Internet and phone provider to residential customers under the XFINITY brand and also provides these services to businesses. Comcast has invested in technology to build an advanced network that delivers among the fastest broadband speeds, and brings customers personalized video, communications, and home management offerings. Comcast Corp. (Nasdaq: CMCSA, CMCSK) is a global media and technology company.