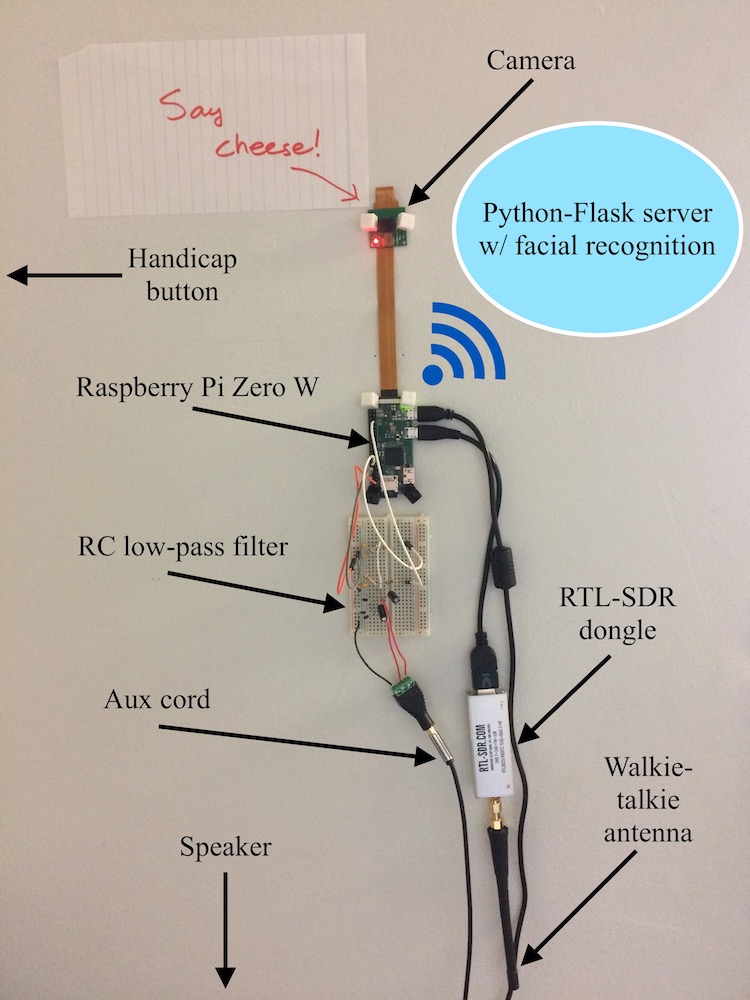 The device, shown here, triggers a facial recognition system on a Raspberry Pi, a popular and affordable microprocessor commonly used by college students, and takes a picture, which it checks against a database. (Photo courtesy of Trevor Phillips)

A UConn Computer Science & Engineering senior, Trevor Phillips, has recently developed a way to create facial recognition security for under $80, using the technology found in a handicap door opening button.

A facial recognition system is a computer application capable of identifying or verifying a person from a digital image or a video frame from a videosource. One of the ways to do this is by comparing selected facial features from the image and a face database.

It is typically used in security systems and can be compared to other biometrics such as fingerprint or eye iris recognition systems. Recently, it has also become popular as a commercial identification and marketing tool. A perfect real world example is the facial recognition used on the iPhone X, which is used to unlock the user’s phone.

The idea to integrate a facial recognition system into handicap buttons began, according to Phillips, when his friend found a wireless handicap door button and the first thought that popped into his head was, “what can I do with this?”

On his website Phillips walks through the process stating that using software-defined radio can help detect the signal from the button, which comes out at 300-390 MHz. The device signal then triggers a facial recognition system on a Raspberry Pi, a popular and affordable microprocessor commonly used by college students, and takes a picture. The photo of the user is then sent to a database, which analyzes 128 data points. If the person is in the database, then the door opens, and the user can enter the room.

Phillips said that this project could be extended and applied in multiple useful real-world scenarios, like, for example, a custom home security system which uses facial recognition to either grant or deny access to the home.

When asked about his keys to success, Phillips cited his education and theoretical knowledge from the UConn School of Engineering, combined with his natural curiosity when approaching projects like this:

“UConn has given me more theoretical knowledge and it is helping to inspire me creatively. But, this project was the first time I felt like an engineer,  able to combine existing technologies from multiple subject areas into something new.”

To find out more about Phillip’s project you can visit his website: https://trevphil.com/projects.