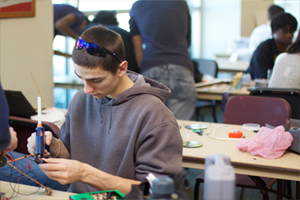 On Saturday, March 9th, more than 500 students and coaches from across the Northeast region competed in the Northeast Regional High School Science Bowl at the UConn campus. A total of 48 teams representing 36 schools matched wits in a Jeopardy!-style quiz bowl covering a dizzying array of scientific minutia along with a model fuel cell car race.

The event was hosted by UConn Engineering for the eighth consecutive year, and 140 undergraduate engineering students contributed their time to make the event a resounding success.