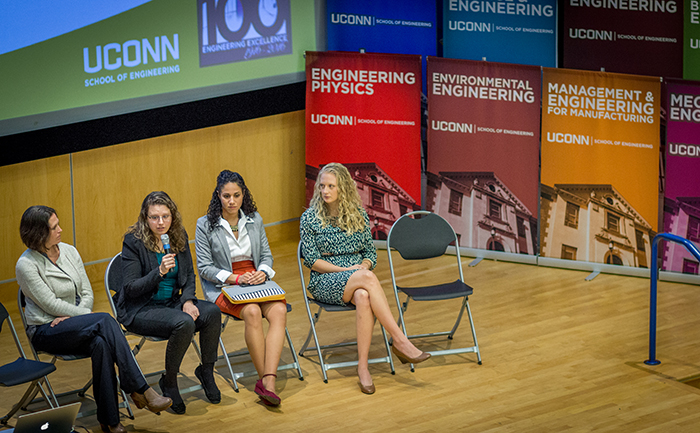 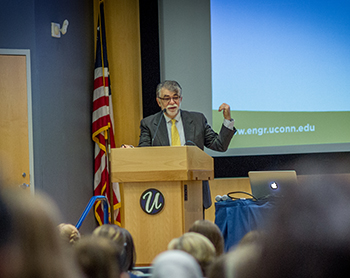 A group of high school girls interested in engineering came to UConn recently as a part of the second annual Women in Engineering day at UConn. The message they received was straightforward- engineering is a strong career choice, and women help to make engineering a more well-rounded discipline.

“Diversity is a prerequisite to creativity, to creative solutions and to progress,” said Kazerounian.

Vice Provost for Academic Affairs Sally Reis agreed with Kazerounian and shared a story about the importance of women in engineering, and how diversity promotes creativity. She spoke about the team of engineers that first invented airbags.

“The first team of engineers that made airbags consisted almost entirely of men. Many of you won’t remember this, but the first group of airbags that were released, millions of them, didn’t work very well for two groups- women and children. Why is that? Because the individuals that were designing the airbags were big men. When we have diversity on teams, when women are in the room, different questions get asked,” Reis said.

Both Kazerounian and Reis emphasized the impressive gains UConn Engineering has made in being more inclusive, including leading public universities in the percentage gains in female engineering graduates over the past five years.

As an example of that outreach, the high school students were able to ask women students and alums questions about their career path. One student asked if the amount of work engineering students face was every daunting. Melissa Jacques (B.S. ME, MSE, ’10) replied.

“It’s easy to sit here, be done with it and say ‘best decision ever, I don’t regret it.’ While that is true, there certainly were points, particularly during my undergraduate schooling, where I would look at the pile of work I had in front of me and I would say ‘why am I doing this, what was I thinking?’” Jacques said.

The close relationship Jacques had with other students combined with the resources available to engineering students helped her get through the difficult coursework.

“It is a lot of work, but there are plenty of resources available. … The reality is that if you’re dedicated, you’ll get through it,” Jacques said.

Jacques also said that the BRIDGE Program, run by the Engineering Diversity and Outreach Center, was one of the reasons she attended UConn. The BRIDGE Program is a five-week intensive program that prepares students who are underrepresented in engineering for their time at UConn. Her fellow panelists mentioned the comparatively reasonable cost, especially for in-state students. All agreed that engineering was the right choice for them.

For a photo gallery of the event, click here. 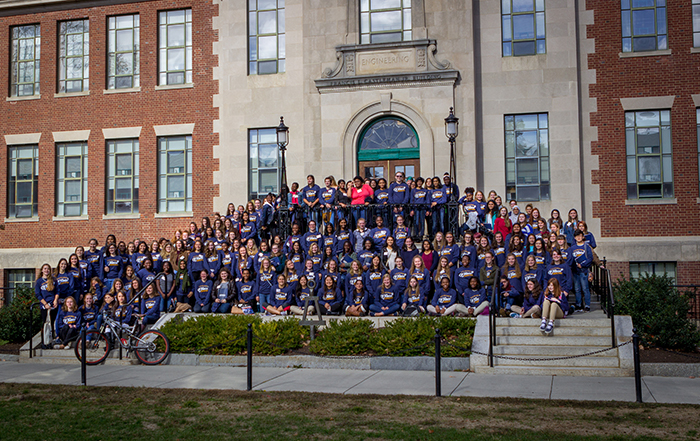 High school Juniors and seniors who came to UConn for the second annual Women in Engineering Day pose outside of the Castleman building. (Christopher LaRosa/UConn Photo)