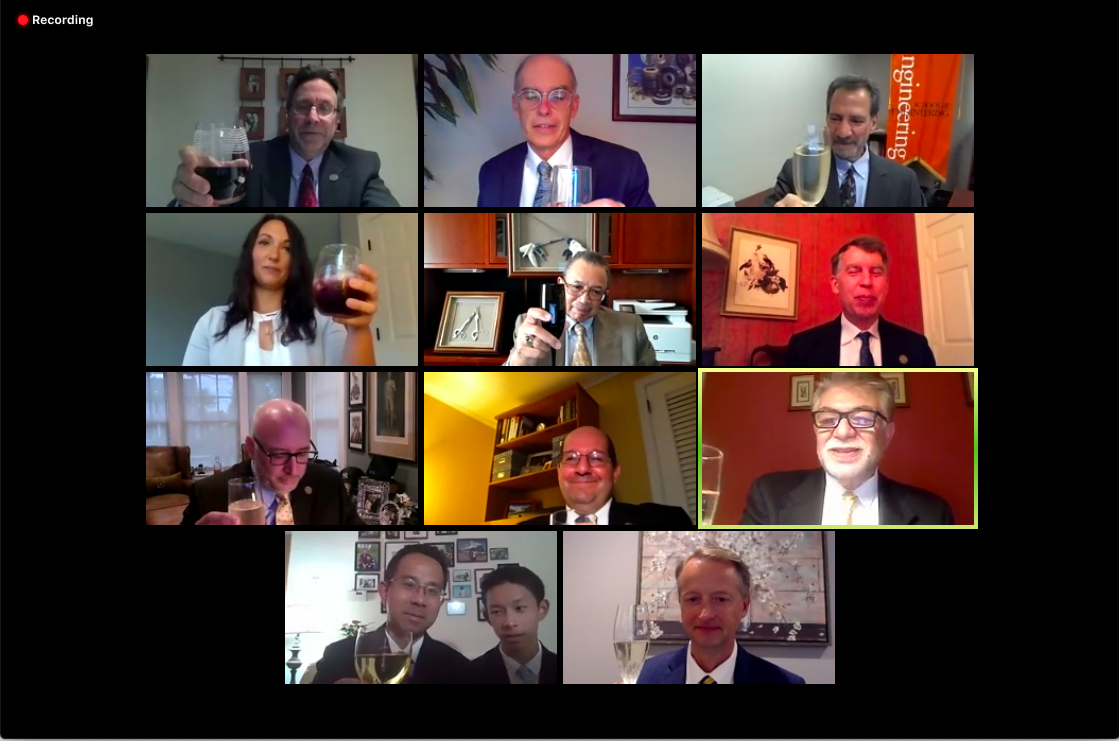 The 2020 class of the Academy of Distinguished Engineers toasts during the ceremony held Thursday, September 17.

For the first time in the event’s history, the University of Connecticut School of Engineering virtually inducted ten exemplary engineers during the annual Academy of Distinguished Engineers ceremony.

Although virtual, the ceremony featured a close-knit and special atmosphere, where the ten inductees were able to speak about their life journeys and work during this COVID-19 pandemic.

The Academy, which has inducted 246 total members since its inception in 2003, honors School of Engineering alumni and Connecticut engineers whose careers have been characterized by their sustained and exemplary contributions to the engineering profession through research, practice, education, policy or service. Members are individuals who bring enduring honor to their alma mater as practitioners and as citizens.

McGeary, who also gave a keynote address on the healthcare industry and COVID-19, talked about her humble start in her hometown, during her induction address.

“Where I grew up, my high school ended up being on academic probation, because it was a poor community that didn’t even have the funds to give every kid their own textbook—we all had to share,” McGeary said. “Later in my high school career, I enrolled in AP Bio, because I wanted to excel and be the best, but on the first day of class the teacher told us to not even bother, since no one from this school had ever passed the AP exam.”

For Douglass, his 40-year career at Texas Instruments was almost squashed over his tardiness during a career fair.

“I went to the Career Center to interview, and I found out that all the positions had been filled that day, so the person at the front desk told me to leave my resume and she’d get it to them. After that, I thought to myself ‘There’s a 10-cent resume I’ll never get back again,’” Douglass said. “A couple of weeks later, they asked me to come in for an interview and my planes got so delayed that I got in at 3 a.m. for a 7 a.m. interview. Everything was a blur that day, but it turned out pretty well for me in the end.”

For more information on the Academy of Distinguished Engineers, and our 2020 inductees, please click here.