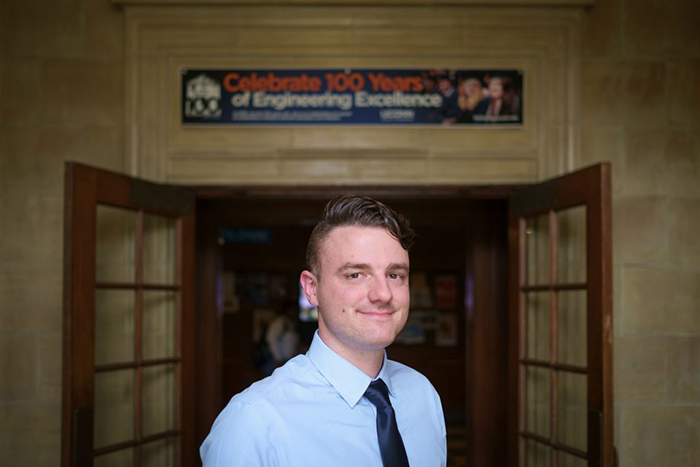 Thomas Underwood ’18 (ENG) at the entrance to the Castleman Building. (Peter Morenus/UConn Photo)

UConn undergraduate Thomas Underwood (ENG ’18) is a model student. A scholarship recipient, veteran, and treasurer for the Mechanical Engineering Honor Society Pi Tau Sigma, he is an active participant in both the School of Engineering and the University.

But it wasn’t always that way. During his high school years in Michigan, he wasn’t interested in school. He knew he would join the armed forces, just as his grandfather had during World War II. But after a stint in the Navy as a nuclear mechanic on a submarine, he was able to shift from an average high school career to an outstanding undergraduate experience.

Underwood is a featured speaker at UConn Engineering’s Gadget Guru’s Gala on Nov. 11, where he will also be part of a Veterans Day ceremony that includes a color guard. The gala is a celebration of 100 years of the School of Engineering offering a four-year program, and marks the contributions the School has made to the University, the state, and the nation. Proceeds from the gala will go to fund new scholarships in engineering.

When he enlisted, Underwood went to the nuclear power training pipeline to become a nuclear mechanic, called a machinist mate. “It’s a very academically rigorous training program,” he says.

During the two-year training, he was stationed in Charleston, S.C. He then served for four years as a nuclear mechanic on the USS Hartford, a nuclear-powered fast-attack submarine, working on the reactor and the power plant propulsion system.

While on the Hartford, Underwood was stationed at Groton. Over the course of his service, he became a first class petty officer, and received the Navy and Marine Corps Achievement Medal, two Good Conduct Medals, and the Navy Expeditionary Medal. The Achievement Medal recognizes the contribution of junior officers and enlisted personnel; Underwood received his for his overall contribution while in the Navy. The Good Conduct Medal is awarded for three consecutive years of honorable and faithful service, and the Expeditionary Medal is awarded for officers and enlisted men who have engaged armed opposition or operated under circumstances that are deemed to merit special recognition.

But after four years on a submarine, he decided it was time for a change of scenery.

“I decided to get out and go to school for engineering,” Underwood says. “What I had been doing was interesting, but not exactly what I wanted to do. When I got out it was pretty clear that UConn was the school I wanted to go to.”

Unfortunately, his lack-luster performance in high school was an obstacle to getting into UConn, so he first attended Three Rivers Community College, to prove himself academically. After a year in community college, he was ready to transfer to UConn. He wanted to take classes at the Avery Point campus, since he was still based in Groton, but the engineering program there was just being established and was not yet ready to accept new students.

That’s when his girlfriend’s family introduced him to Marty Wood, a friend of the family who had a long career in the UConn School of Engineering and had served as its assistant dean of undergraduate education and diversity until 2013. At the time, Wood was interim director of the Avery Point Campus, and he still serves as director of engineering there. Wood is also a Navy veteran.

Since the Avery Point engineering program was just getting off the ground, it wasn’t possible to apply directly to the campus for engineering. So Wood explained what his options were.

“He was very helpful navigating the whole process getting started at UConn and the School of Engineering,” Underwood says. “Before I was even a student at UConn, he was very kind and gracious.”

Underwood entered the Avery Point campus as an ‘undecided’ major in ACES (Academic Center for Exploratory Students), before transitioning to the mechanical engineering program.

He attributes his success to the people who have supported him in his journey to UConn.

“I’m just honored that anybody thought of me for any of this stuff,” he says. “Most of [the credit] really goes to the staff and faculty here and how involved they are and how much they care about students, as opposed to anything really spectacular I’ve done. Especially Marty Wood and my advisor, (assistant professor of mechanical engineering] Dave Giblin.”