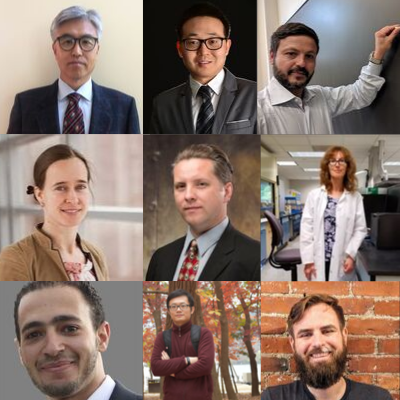 During every new school year, a new crop of students come on to campus, ready to make connections, get involved and take on new challenges. But, behind the scenes, is often a group of other new faces—faculty—who are stepping into a new environment, with similar goals.

This Fall, this new group of faculty contains nine talented researchers and educators, hailing from as close as the University of Connecticut, to as far as The Hong Kong University of Science and Technology, and range from having several years of experience as a faculty member to fresh out of a Ph.D. program.

Below are the nine faculty members who have joined UConn Engineering this Fall:

Bio: Prior to joining UConn, Aknouche-Martinsson served as an assistant professor at University West, Sweden, for eight years. During her time there, she taught courses in algorithmics, robot vision, robot modelling, probabilistic robotics and physics. Previously, she was part of the algorithmics team at a medical imaging company, developing algorithms for automated vessel analysis. Aknouche-Martinsson received her Ph.D. in computer vision from Université de Clermont-Ferrand, France, in 2008. She received her M.Sc. in engineering physics from Chalmers University of Technology, Sweden, and Ecole Centrale Paris, France, in 2002 as part of a double degree program.

Bio: He received his Ph.D. from the Computer Science & Engineering Department at the Hong Kong University of Science and Technology (HKUST). His research interests include location-based services, urban and mobile computing, data analytics and smart transportation. He was a Google Ph.D. Fellow in Mobile Computing in 2015.

Bio: Hong received his Ph.D. in Electrical and Computer Engineering from the University of Connecticut in 2005. Before this new role, Hong served as an assistant research professor in the Department of Computer Science and Engineering at UConn. His research interests include static/dynamic bone histomorphometry, assessing bone defect repair, automated image analysis, image processing and pattern recognition. Hong has taught multiple CSE undergrad/grad level courses including digital image processing, data mining, and introduction to discrete systems.

Bio: Leek has over 25 years of experience in the area of polymer characterization and product failure analysis. In her current position as Senior Forensic Scientist at the Travelers Risk Control Lab, Leek investigates materials failures related to loss of property, business, and personal injury. For ten years prior, she served as Interim Director and Associate Director of UConn’s Industrial Affiliates Program (IAP). In this capacity, Leek worked with scientists and engineers from a wide variety of Connecticut companies who needed access to the range of analytical tools and faculty expertise at UConn’s Institute of Materials Science to solve various materials-related challenges. During this time, she also served as a co-advisor for several MSE Senior Design teams and as a mentor for the Society of Polymer Engineers (SPE) Polymer Graduate Student Chapter and the UConn Connects program. Leek also spent nine years working at Millipore Corporation as a Senior and a Consulting Senior Research Scientist and two years at T.A. Instruments as an Applications Scientist. Leek has an M.S. degree in Textile Science and Engineering from North Carolina State University and an M.S and Ph.D. in Polymer Science from UConn.

Bio: Poludnenko received his bachelor’s degree in Physics and Mathematics from the National University “Kyiv-Mohyla Academy” in Kyiv, Ukraine, and Masters and Ph.D. degrees in Physics and Astronomy from the University of Rochester. Upon graduation, he joined the Department of Energy ASC Flash Center at the University of Chicago as a postdoctoral researcher. Subsequently, Poludnenko worked at the Naval Research Laboratory first as a National Research Council postdoctoral fellow and later as a permanent research staff member. Prior to joining the UConn Mechanical Engineering Department in the Fall of 2019, he had been an associate professor in the Department of Aerospace Engineering at Texas A&M University. His research includes theoretical and computational studies of complex multi-physics reacting and non-reacting flows, numerical algorithm development for computational fluid dynamics, and high-performance computing. Poludnenko was a recipient of the Distinguished Paper Awards at the 36th and 37th International Symposia on Combustion (2017 and 2019), the 2016 François Frenkiel Award for Fluid Mechanics of the American Physical Society Division of Fluid Dynamics, and the Alan Berman Research Publication Award from the U.S. Naval Research Laboratory.