When UConn formed a partnership with five Ethiopian universities, the goal was to develop new ideas to alleviate the serious water-related problems in that country. Just a few years later, those ideas are already forthcoming.

At the Ethiopian Institute of Water Resources (EIWR) – a centerpiece of the UConn-Ethiopia partnership – one student’s final paper stood out in particular. It was on the development of potentially harmful algal blooms, which pose a serious hazard to water quality in freshwaters and can produce a variety of toxins responsible for acute health problems. The student paper outlined the hazards of these algal blooms, how they proliferate in the water, and some ideas for mitigating these hazards.

“This is the first systematic review of its kind that I know of,” said Dr. Janvier Gasana, an associate professor at the Robert Stempel College of Public Health and Social Work at Florida International University. “It’s almost ready for publication.”

“These experts that we’re training in this program will be the ones to be consulted since they have the appropriate training in the area of water management and public health,” said Gasana, who recently taught a course on advanced water-associated diseases. “Keep in mind that no other country in that region has trained as many water and public health professionals as this program does.”

Gasana was just one of the 20 faculty that UCONN has sent to teach since the inception of the program. The result is a wide range of expertise that brings a level of education otherwise inaccessible to the Ethiopian students. Since the program began, eight UConn faculty members from UConn have traveled to Addis Ababa to teach in the program, and 12 faculty from a variety of international universities teach courses to graduate students. 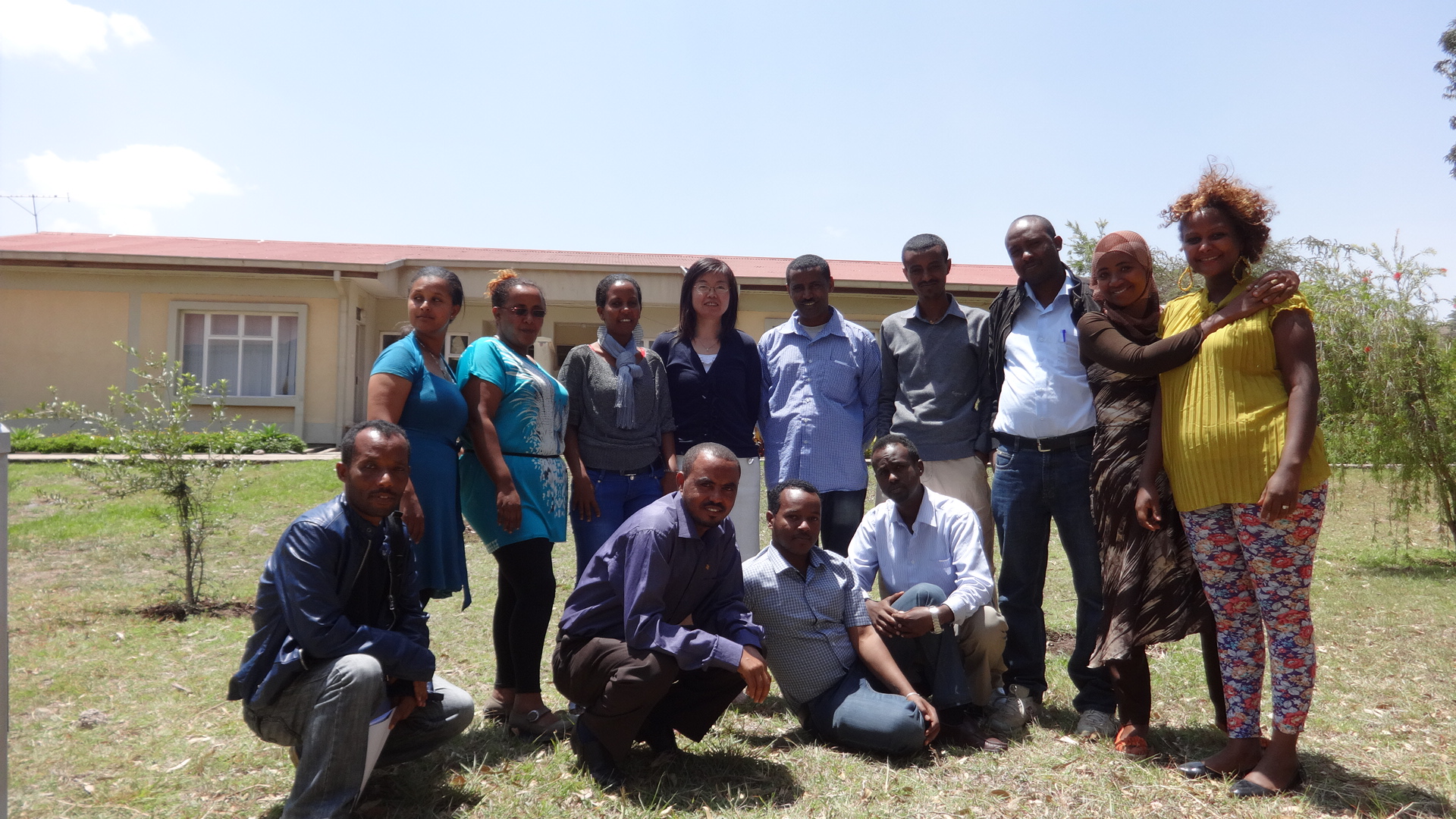 In addition to the PhD candidates, 20 students from all regions of Ethiopia graduated with master’s degrees from the program this summer. Of these, 18 were in the Water and Public Health track and two were in Water Resource Engineering and Management.

Ethiopia’s water problems aren’t due to a lack of water – it has 12 river basins and an estimated 122 billion cubic meters of water. But there’s a lack of resources and expertise in water management that has kept all but a small fraction of it from being used domestically. EIWR is designed to develop new knowledge and applications through higher education, research and outreach. That requires new technologies for data collection, a highly trained workforce and research in sustainable water resources.

EIWR develops graduate programs in the management of water resources for Ethiopia and provides strong interdisciplinary training to MSc and PhD students. Students in the program conduct research that addresses water resources issues at the local, national, regional and global scales.

The EIWR students – who come from 10 different universities in Ethiopia – will go back to schools in Ethiopia to teach what they learned in the program. Gasana said the work and innovations of these students will affect all countries where the Nile River flows – Ethiopia, Rwanda, Tanzania, Uganda, South Sudan, Sudan and Egypt.

“These countries are building up partnerships to better manage the water from the Nile River, and these students will definitely take the lead as they are trained experts in water management and public health,” Gasana said.

There are still close to 30 million Ethiopians who don’t have access to safe and reliable sources of drinking water, according to UNICEF, and the situation is particularly dire in rural parts of the country. One of the obstacles impeding progress, says UConn’s Amvrossios C. Bagtzoglou, is a systemic one. Innovation is needed – Ethiopia’s water problems cannot be solved merely by drilling wells, building dams or other structures. Despite the lack of resources, he said, the students are extremely dedicated.

“They genuinely want to be part of the solution to the region’s water problems,” says Bagtzoglou, professor and head of the Civil & Environmental Engineering department. “The mere interaction with so many international faculty will open up not only their minds but also avail them tremendous opportunities.”

Bagtzoglou, who has worked with Professor Yilma Seleshi, the EIWR Director, on the development of the Water Resources Engineering and Management curriculum and recently taught a graduate class on Advanced Environmental Statistics in the program. He said that EIWR is designed to develop a new generation of “problem-solvers.”

“If we can accomplish that, that will be our paradigm shift.”

Bagtzoglou says conditions in Ethiopia – even its capital city – make teaching difficult at times. Power outages were a regular occurrence; without a generator, that meant classes were often cancelled. The caliber and motivation of the students, though, have kept the program successful. The EIWR program is the only one of its kind in the country, so it can be selective; fewer than 10 percent of the more than 1,500 applicants have been accepted as students.

Gasana said the students are key to the success of the program.

“I wish I had those students here,” he said. “They paid attention, and they’d write down everything I said. They had a lot of questions – I spent my nights preparing because I knew they would be asking questions. We were really communicating.  We were learning from each other.”

Gasana also took his students to a wastewater treatment plant that serves 70 percent of the Addis Ababa population.

“I wanted them to see how it gets done,” he said. “Now I can explain to them what we were talking about.”

Tassew Woldehanna, vice president for research and technology transfer for Addis Ababa University, said the program is also notable for the number of female students it has. Of the 20 graduates at the July ceremony 11 were women.

“More than half of the students are female,” said Woldehanna, who gave the keynote address at the July graduation ceremony. “This is a first of its kind program for us, in that it advances gender.”

And in general, he said, EIWR’s success is critical to the future of the region.

“This is a very important program and it will benefit the country if it continues,” he says. “The program should continue, but we will have to work very hard to sustain it.”

Keneni Alemu, a PhD student in the water and health program, says he’s optimistic that EIWR can help Ethiopia realize the potential of its water resources.

“In Ethiopia, any kind of poverty is related to water – either the supply of clean water or the lack of appropriate professionals to manage and develop water resources,” Alemu says. “But the hope is that Ethiopia has a huge reserve of water resources and we can bring sustainable development if we change this resource into opportunity. This could not be achieved without the water professionals. Thanks to the University of Connecticut and the American people, dreams have started converting into reality and will be converted more in the coming years.”

Baikun Li, an associate professor in the Civil and Environmental Engineering department, noted the stark differences in water resources between Ethiopia and elsewhere in the world. In the U.S., for instance, the average person uses 150 gallons of water per day. In Ethiopia, the average is two gallons per day.

While the expertise is there now, resources continue to be short of ideal. Li, a teacher in the EIWR program, says the technology exists to solve most of Ethiopia’s water problems. “But the main thing is money,” she said. “Treatment for wastewater is really expensive.”