During the holiday break between semesters, three members of the UConn chapter of Engineers Without Borders (EWB) traveled to Nicaragua to complete the last phase of a long-percolating engineering project aimed at improving the lives of impoverished villagers by effecting permanent repairs to a road linking their rural village, La Prusia, to the large colonial city of Granada. (View additional photos here.) 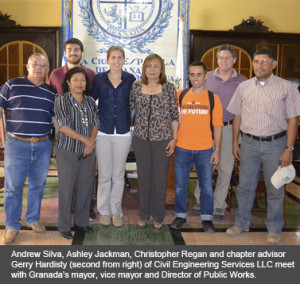 In January, seniors Andrew Silva (Chemical Engineering), Christopher M. Regan, Jr. (Civil Engineering) and Ashley Jackman (Management & Engineering for Manufacturing) – accompanied by mentor Gerry Hardisty of Civil Engineering Services, LLC – spent 11 days in Nicaragua fulfilling a mission initially begun in 2008. The focus of their efforts is a dirt road that becomes impassable each year due to seasonal torrential rains, which produce deep ravines blocking motorized traffic. The road is one facet of a much larger socio-economic problem afflicting La Prusia, but permanent road repairs are seen as a major step toward providing residents access to jobs, health care, services and shopping in nearby Granada, and to enhancing their economic stability.

Hardisty, a licensed professional engineer and land surveyor, became involved in the Nicaragua project in 2010 and provided a continuous presence throughout the dynamic changes in UConn EWB membership, varying approaches to the erosion problem, fluctuating funding for the project – which relies on donations and grant support – and changes in Granada’s governmental leadership. Hardisty and the student leaders were deeply gratified to bring their project to a successful conclusion.

Over the last two years, members of the “project Nicaragua” UConn EWB team developed and refined two prospective solutions to the road erosion problem. One involved road stabilization techniques using durable local materials; the second centered on strategies for diverting the rainwater. In the end, the group chose the diversion approach first championed by fellow member Bryan Hallinan, a Civil Engineering senior.  According to Silva, Hallinan’s design involved construction of permanent swales to transport rainwater away from particularly vulnerable portions of the road. 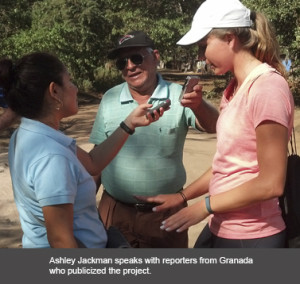 Regan, who became involved with project Nicaragua initially as chair in 2011 and again this academic year following a Study Abroad year in Sweden, fleshed out and refined the initial design concept during the fall semester, with guidance from Hardisty, using AutoCAD®. The team then submitted their comprehensive proposal to the national EWB organization for approval before they could proceed.

On the Ground in Nicaragua

Silva, the outgoing president of UConn EWB, says the team’s first task upon arrival in Nicaragua in January was to meet with partners from the participating NGO aid agency, Casas de la Esperanza, as well as Granada’s Director of Public Works to flesh out a detailed plan.  Important first steps were to conduct a final survey of the road and surrounding area; to meet with local residents to explain the project and obtain their enthusiastic consent; and to discuss the technical details with the construction crew. 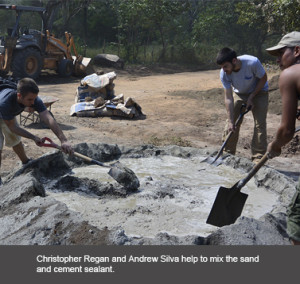 Silva credits Jackman, who speaks fluent Spanish, with playing a crucial role as the team’s translator. During the year leading up to the team’s journey, Jackman communicated repeatedly with Granada officials – including two different construction crews after one withdrew – as well as the Director of Public Works and Casas personnel. Her fluency in Spanish, combined with her understanding of engineering principles and practices, were vital as the team refined their construction plans and finalized their trip. Once the group arrived, she continued to serve as a pivotal communications link.  Jackman, who has relatives living near Granada and has spent considerable time in the area, enlisted her family to photograph the road site prior to the team’s trip and to chauffeur the UConn group during their travels in Nicaragua.

Regan notes that the team’s plans were amended considerably by evolving policies, personnel and needs on the ground. “We initially targeted several locations on the road, but we learned from the Director of Public Works that the city planned to pave a 300-meter section that included two of the most vulnerable sections. We also decided to use alternate materials, because the indigenous volcanic rock is more durable than the pavers we initially planned to use.”

“After speaking with residents, we decided to target our remediation efforts on a section of the road that becomes the headwaters of a significant seasonal stream,” says Hardisty. Regan adds, “The site is located at the intersection of the main road and an access road to the Casas-built school. It’s an area where the rains 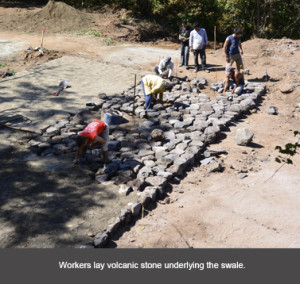 The team performed final measurements for the swale, outlining a rectangular area on the road measuring 7m x 14.5m that defines the bed of the swale, which slopes gradually toward the middle.

The construction itself consumed four fatiguing days as Silva, Regan, Jackman and Hardisty worked side-by-side with the construction crew. The swale was completed in three phases. The construction crew began by digging the rectangular plot, which cuts directly across the road. Next, locally-quarried volcanic rock was chipped into tailored blocks, and the EWB members joined the construction crew in fitting the blocks snugly together in the swale bed, with a slightly graduated grade from the inlet to the outlet portion. The final step was to apply a mixture of sand and cement as a sealant over the blocks to provide a seamless channel.

The swale will be put to a real test when the winter rains arrive again in May, but the municipal government in Granada has agreed to assume responsibility for maintenance of the road and the swale, and for construction of additional swales along the route. Regan, who serves as the current chair of the project Nicaragua group, says members expect to return next year to monitor the performance of the swale and report to the national EWB on their findings. 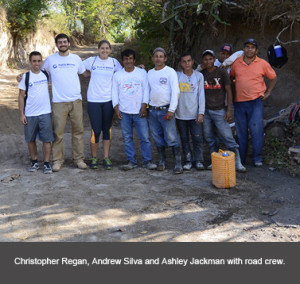 Throughout the long days, Silva notes, residents watched the proceedings and even prepared lunch for the workers, generously sharing from their larders despite their meager circumstances, as a show of heartfelt appreciation. Even the Granada media provided coverage of the team’s efforts, interviewing Jackman for an article that appeared on the El Nuevo Diario news website.

Commenting on the journey, Regan said “The most satisfying aspect was to gain real-world practical experience while making such a huge impact on the community.”

For members of the UConn EWB team who worked on the Nicaragua project throughout their undergraduate years, it was a deeply satisfying conclusion.  The students expressed their sincere appreciation for the financial support they received from Pratt & Whitney, which covered the costs of the materials and construction labor as well as the students’ travel expenses (Silva self-financed his travel expenses from a Presidential Scholar enrichment award). The team was especially appreciative of Hardisty’s ongoing mentorship and engineering guidance of the team.

Members of Casas de la Esperanza – which has been embedded in La Prusia for several years building schools, medical facilities and permanent homes to improve residents’ standard of living – also provided valuable support to the UConn EWB team, according to Silva.

Please visit the UConn EWB website for details of the group’s activities.  To donate funds toward the chapter’s projects, please follow this link.

For previous coverage of the Nicaragua project, click here and here.