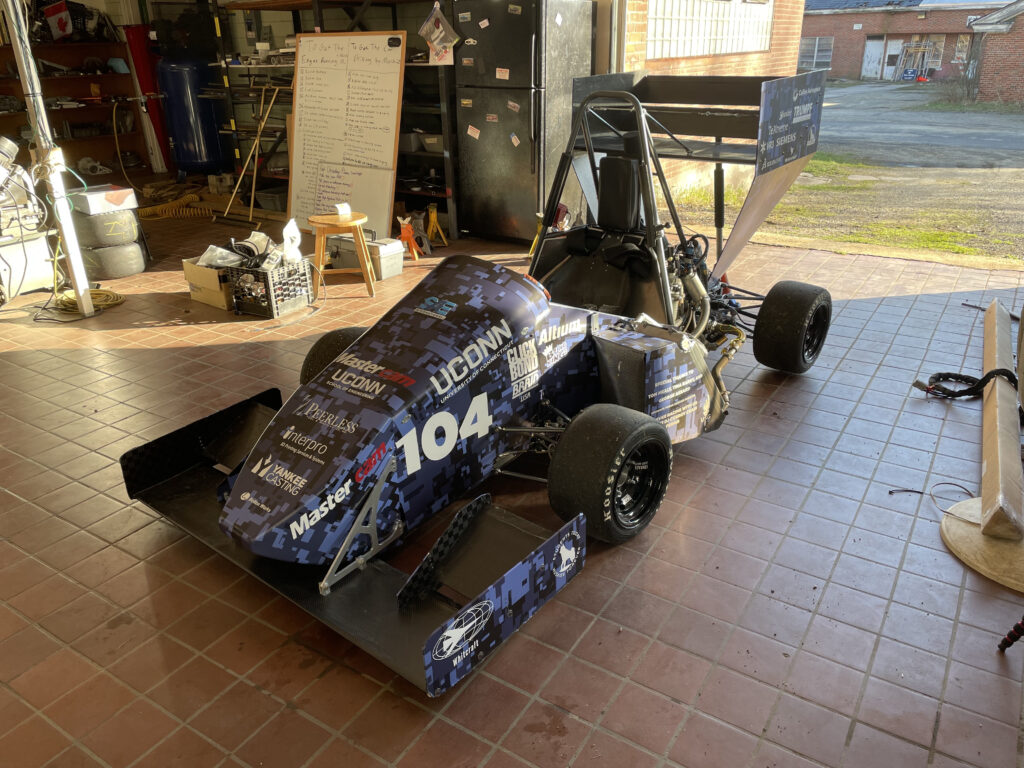 The car sits in the entrance of the UConn FSAE headquarters on Depot Campus. (UConn Photo/Eli Freund)

Hanging from the walls of a small building on the University of Connecticut’s Depot Campus are shells of former race cars. The smell of gasoline, metal, and fiberglass clings heavily to the air. Sitting front and center is a 480-pound small-scale version of a Formula 1 race car, with a Yamaha motorcycle engine, built by one of the most hands-on clubs on campus—UConn Formula SAE.

UConn FSAE’s history can be traced to two distinct eras, the initial era, from the late 90s, to the current iteration of the club, which was revived in the late 2000s, with renewed funding and vigor.

The current car, which is the 13th generation, and the current president, Mechanical Engineering senior Cal Pitruzzello ‘22, are excited to put out their best version yet for their upcoming entry into the national Formula SAE Michigan competition on May 18.

“This year, our car is a little heavier because we added a front and rear wing, giving it more downforce, and better grip, allowing it to turn faster. When the car is going 50 miles per hour, you’re adding 100 more pounds to the car,” Pitruzzello said.

Last year, the team had their best finish yet, finishing in fifth place overall and second place in the endurance competition, out of 60 collegiate teams from across the country.

The secret sauce of the group, and the reason for their success, is the dedication and passion of its people to work together as one, cohesive team. While most people in the club are mechanical engineering majors, they have several other majors represented, including nursing and economics. Brandon Koehler ‘22, a senior economics major and secretary for UConn FSAE, is one of those non-engineering members.

“I joined this club because I’m a huge car guy,” Koehler said. “Obviously some of the concepts are a little bit far into engineering for my knowledge, but I’ve learned so much about cars that I never knew before. It’s pretty amazing that anybody can come into this club, and you don’t have to be an engineering major.”

“They’re brutal,” Pitruzzello said. “You’ll walk away sweating bullets, but you learn so much from that experience.”

The design and build itself are another experience, as the team has to start from the ground-up each year, only allowing some elements to remain. The process starts on the computer, in SolidWorks, a CAD and CAE software, allowing the team to visualize each section of the car. Then, different divisions of the team get to work on their piece of the car, which is divided into the frame, powertrain, suspension, data, controls and ergonomics, electrical, composites and aerodynamics. Each team has a student lead, and the entire build is overseen by Chief Engineer and senior Mechanical Engineering student Elliot Bushman ’22.

“The biggest rule is that you can’t run the same chassis, so we decide to design and build a new car every single year,” Bushman said. “By building a new car every year, it’s a better experience for the students, it enhances knowledge transfer, and it gives more opportunities for students that are only here for four years.”

Bushman said that even though they race a new car every year, they stay ahead of the pack by starting the process a year and a half in advance on the new design. In the spring, they start designing and have outreach to sponsors, and around Thanksgiving break, they start actually building the new design.

“Each of the leads take on their individual systems and distributes the work to their team members, helping them grow their engineering skills and capabilities,” Bushman said. “As the year goes on, we smoothly integrate each system of the car together until we have a finished product to race.”

“The real challenge of the team is leading a group of 50 people, with different levels of experience, to successfully build a whole car and improve it year to year. This team has given me, and others, incredible leadership experience,” Pitruzzello said.

The team will be working over the next several weeks to fine tune their car and will be competing at the annual Formula SAE Michigan competition on May 18. For more information on the UConn FSAE team, please click here.