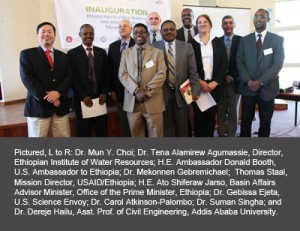 The Ethiopian Institute for Water Resources (EIWR) was formally inaugurated during a ceremony at Addis Ababa University on February 15th, 2012.  Officials from UConn, including Dean of Engineering Mun Y. Choi and Vice President for Research Suman Singha, as well as top officials from Ethiopia’s Ministry of Education, participated in the festivities.

EIWR is Ethiopia’s first research institute focused on water.  It was established to carry out the mission of a United States Agency for International Development (USAID) funded transnational higher education partnership (HEP) between the University of Connecticut and Addis Ababa University to build capacity in institutes of higher education in the area of sustainable water resources management.  Read more about the project here.

The seed for an Ethiopian center of excellence in water resources was planted in 2008 by UConn associate professor of Civil & Environmental Engineering Mekonnen Gebremichael.  The project has solidified during the last three years thanks to a dedicated, multidisciplinary team that includes Drs. Michael Accorsi, Guiling Wang, Amvrossios Bagtzoglou and Emmanouil Anagnostou of Civil & Environmental Engineering; Dr. Farhed Shah of Agricultural and Resource economics; and Drs. Jeffrey Osleeb and Carol Atkinson-Palombo of the Department of Geography.  Besides UConn, the project includes partners from Alabama A&M University along with five Ethiopian universities: co-lead Addis Ababa University, Arba Minch University, Bahir Dar University, Hawassa University and Mekelle University.

The team credits UConn’s leadership, and in particular, Dean Choi, Dr. Singha and Dean of the College of Liberal Arts and Sciences Jeremy Teitelbaum, with helping to make the effort a success.

The February dedication of the EIWR was led by Dean Choi in the capacity of Master of Ceremonies. It was his third visit to Ethiopia to cement the partnership with Addis Ababa University’s administrators and the top officials of Ethiopia’s Water Resources and Higher Education ministries.  Opening remarks were given by Dr. Admasu Tsegaye, President of Addis Ababa University; His Excellency Dr. Kaba Urgessa, Ethiopia’s State Minister of Higher Education; His Excellency Donald Booth, the U.S. Ambassador to Ethiopia; Dr. Gebisa Ejeta, U.S. Science Envoy; and His Excellency Ato Shiferau Jarso, the Advisor to Ethiopia’s Prime Minister on water affairs.

Commenting on the EIWR partnership, Dr. Ejeta said, “I congratulate USAID and the Ministry of Education, Addis Ababa University and the University of Connecticut for putting together this institute in a particularly critical area of water.  I am particularly impressed, as a person who has worked in the developing world in capacity building for the past 35 years or so.  I have never seen a project invest in this large a cohort [for] capacity building within just a couple of years.  I think whatever you have done, you need to bottle it and share it with the rest of us.”

Representatives of the three key partners – Ambassador Booth, President Tsegaye of AAU and Dr. Singha of UConn – signed certificates of inauguration to mark the occasion. Also in attendance at the ceremony were Drs. Accorsi and Atkinson-Palombo, who had worked as core members of the partnership to make this possible. 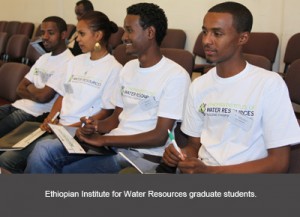 To date, EIWR has recruited 42 graduate students (24 M.S. and 18 Ph.D. students) and provided training to more than 150 professionals through new coursework in various aspects of water resources engineering and management.  The large number of students is triple the size originally envisioned under the strategic plan, and was made possible by extra funding from Ethiopia’s Ministry of Education.  When the current Ph.D. candidates complete their degrees, it will represent a doubling of the number of doctoral degree-holding water resources management experts in Ethiopia and a dramatic expansion in the nation’s ability to educate water resource professionals through its university system.