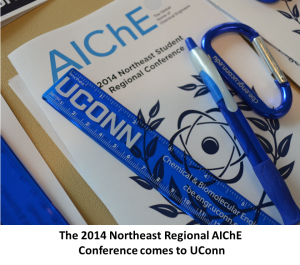 The Department of Chemical & Biomolecular Engineering was the proud host of the 2014 Northeast Student Regional Conference for the American Institute of Chemical Engineers on April 4-5, 2014. The event attracted more than 300 undergraduate chemical engineering students from 21 schools, traveling from as far as McGill, Cornell and Maine, to as near as UMass and the University of New Haven.

After one and a half years of preparation, the UConn planning committee was excited to see the conference come to life. The day’s success was a remarkable feat considering UConn’s initial plans were to accommodate no more than 200 guests. “I was pleased by the support of our committee and the dedication of our volunteers,” says Nathan Kastner, UConn undergrad (Cheg ’14) and chair of the regional conference. 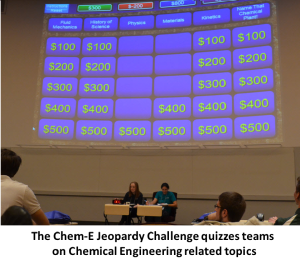 Saturday kicked off with the paper competition where students delivered technical talks on their personal research, followed by a question and answer session led by a panel of faculty judges. Contestants were evaluated on the execution of their designs and results, in addition to their delivery and interaction with the audience. “The quality of the papers and the poise of the students were very impressive this year,” commented Prof. Dan Burkey of the University of Connecticut. Michelle Teplensky of MIT authored the winning paper presentation, “Controlled Release of Type-2 Diabetes Systems.” 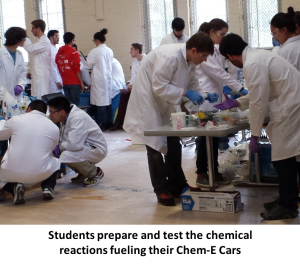 The Chem-E car race was an intense day-long affair. Leading up to the competition, students designed model-sized cars powered by a chemical reaction. Their machines were required to stop after a specific distance, either by exhausting their fuel supply at just the right moment, or by the triggering of a different chemical reaction.

The 14 competing teams spent the morning preparing the proper mixtures and formulas for their cars, and then held their breaths in anticipation, hoping that their machines would halt at the precise distance—25 meters—revealed just hours before. Cornell’s “Battery Car” entry was the most successful, stopping within inches of the mark. “Each teams’ spirit was contagious, and their focus to rise to the challenge made it a thrilling event and a great day overall,” said Kastner.

Those not involved in the car competition cheered their teams on in the Chem-E Jeopardy challenge. With trivia categories including kinetics, thermodynamics, heat transfer, and more, 12 teams of four proved who was savviest in chemical engineering related topics. During a thrilling Final Jeopardy round, WPI knocked Clarkson University out of first place by betting it all and coming out on top.

The winners of each regional competition will compete on the national stage in Atlanta this November.

The conference concluded with an awards banquet and a keynote speech by UConn alumnus Mark Vergnano, executive vice president of DuPont. Vergnano shared his career journey with the attendees, and the personal values driving both him and DuPont. He also detailed the exciting future in store for the world of chemical 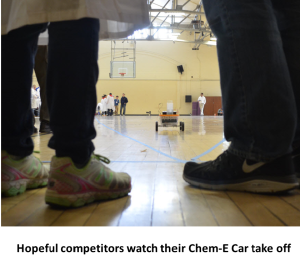 engineering and how he would approach starting a career if he were to do so in today’s world.

Vergnano ended with an extended question and answer period, giving students the opportunity to draw on his extensive achievements from their own perspective. “Based on my interaction with the students at this event, I feel very good about the future of Chemical Engineering,” he said afterwards.