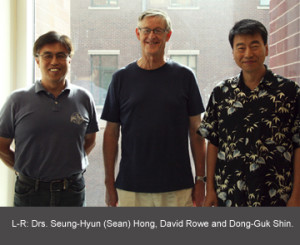 An estimated 10 million Americans are currently living with osteoporosis, and an additional 18 million are at risk of developing the disease, according to the American Academy of Orthopaedic Surgeons website. Yet the causes of osteoporosis and its precondition, osteopenia, are complex and not fully understood.

With the objective of gaining insight into the role of specific genes on bone health, a multidisciplinary team of researchers from UConn Engineering, the UConn Health Center and colleagues at the Jackson Laboratory in Bar Harbor, Maine, have received a new five-year, $3.2 million grant from the National Institutes of Health’s (NIH) National Institute of Arthritis and Musculoskeletal and Skin Diseases.

The work of the UConn-Jackson Lab research team will complement and expand upon an ongoing research initiative, called the international Knockout Mouse Project (KOMP).

KOMP is an NIH-funded initiative aimed at unveiling how each of the approximately 25,000 genes in the mouse genome influences the individual’s development and health. As its name suggests, this research involves the systematic removal or “knock out” of genes to create a series of specially-designed transgenic mouse populations. Because mice and humans are so similar anatomically and physiologically, they are regarded an excellent stand-in for humans in research studies.

The UConn-Jackson Laboratory team will examine the role of genes on skeletal development and bone health. The team includes David Rowe, MD, Director of the Center for Regenerative Medicine and Skeletal Development at the UConn Health Center (UCHC); Dr. Cheryl Ackert-Bicknell, an expert on bone density and skeletal genetics at the Jackson Laboratory (JAX); Dr. Dong-Guk Shin, a professor of Computer Science & Engineering (CSE) and member of the planning committee for the nascent Institute of Systems Genomics (ISG); and Dr. Douglas J. Adams, Assistant Professor of Orthopaedic Surgery at the UCHC and Director of the MicroCT Imaging Facility.  Also contributing are Dr. Seung-Hyun (Sean) Hong, an assistant professor-in-residence in CSE; research assistant Pujan Joshi (CSE); research assistants Xi Jiang and Li Chen, who are associated with Dr. Rowe’s center; and research assistants Renata Rydzik and Vilmaris Diaz-Doran, who collaborate with Dr. Adams

The goal, according to Dr. Rowe, will be to understand the “functional consequences of each gene; what it does, and what happens to the skeleton when we remove that gene. The Human Genome Project has putatively identified all of the genes in the human species. But although we have sequenced them, we don’t know what function they serve. Our work is to develop a functional equivalent of the Human Genome Project, but focusing on genes that influence bone physiology.”

Bones play an enormous role in overall health, according to Dr. Ackert-Bicknell. “Bones are everything. They not only provide structural support and protect vulnerable organs, they also contribute importantly to the production of osteocalcin and other hormones necessary to pancreatic function, and contribute to energy balance, metabolism, respiration and even heart health.” Furthermore, she notes, an astonishing 78% of all genes in the human body are expressed in bone.

Heredity is widely regarded as having the most significant role in a person’s development of osteoporosis. Dr. Ackert-Bicknell says, “From studies of twins and families, we conclude that between 50% and 85% of variability in bone density is attributed to heritable factors.”

Some KOMP researchers are investigating bone density, but using DXA-based systems.  Dr. Ackert-Bicknell asserts that this approach yields “an incomplete understanding of bone physiology. It provides only a snapshot in time; it doesn’t tell us how or why the bone is in the condition we find it.”

For their study, the UConn-JAX team will rely on one inbred mouse strain (C57BL/6NJ), engineered at JAX in Maine. This ensures that all of the study subjects have identical genetic profiles before they are modified by the removal of one gene per transgenic line. Some strains will fail to survive to the 16-week threshold, and others will have obvious disorders such as diabetes or kidney failure. These will be excluded from the UConn-JAX study. 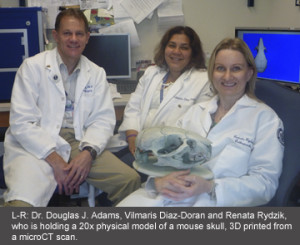 l conditions – including the humidity, temperature, light exposure, and even the nutritional composition of the grains fed the animals – will be identical for all mice included in the five-year study.  Seasonal variations are one variable that cannot be eliminated, so the team will include 12 sets of control animals (that is, they retain their full genome) each year of the study.

During their formative days at the JAX facility, the mice will be injected with two dyes that accumulate in the bone, where they will be incorporated into new bone as it is formed. At 12 weeks, the skull, femur and a vertebra of each mouse (16 per KOMP sub-strain) will be sent to the UCHC, where Dr. Adams will use high-resolution X-ray computed microtomography (microCT) scanning technology to produce and quantify 3D digital images of the bones and skull.

Dr. Adams and his team scan the whole bone, including both the tube-like cortical bone and the honeycomb-like matrix of trabecular bone found primarily toward the end of bones, encased within cortical bone. Dr. Adams likens trabecular bone to the struts that support the Eiffel Tower, and he notes that the trabecular matrix is both extremely strong and very active, producing new bone at a rate 6-8 times greater than for the cortical bone.

The researchers have preprogrammed virtually the entire scanning and computational process to enhance speed and reduce potential variability associated with manual preparation. The researchers simply place the bone or skull samples in cassettes within a robotic carousel, and the microCT scanner/network does the rest: scan the two bones and skull, take measurements and compare them against the control.  The output from this process is quantitative information about the bone architecture and mineral detail for each femur, vertebra and skull.

The microCT scan allows for accurate and precise evaluation of bone architecture, density, and porosity. Dr. Adams explains, “We look at the data relative to the images and quantitative data collected from the contr 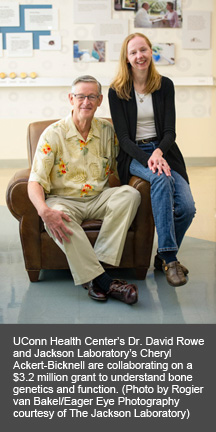 ol animal.  If there are differences in the phenotypes, we target those KOMP sub-strains for Dr. Rowe’s cellular-level examination.”  Dr. Adams’ team will analyze the microCT images – approximately 100,000 or more per month – and transmit this data to Dr. Shin’s cluster computing laboratory in Storrs.

For the cellular analysis portion of the testing, Dr. Rowe and his team will prepare extremely thin, frozen sections of the femur and vertebra and will use staining for specific enzymes to aid in differentiating osteoblasts (bone forming cells) and osteoclasts (bone dissolving cells). The sections will then be viewed under a fluorescence microscope while illuminated using different wavelengths to reveal cellular details of the bone.  “The histology technique we are using is faster than traditional techniques, so we are able to generate more information per level of effort,” explains Dr. Rowe.

Approximately 800 histological images will be transmitted electronically each month from the UCHC to Dr. Shin’s cluster computing laboratory in Storrs, where Dr. Hong will translate them into quantitative numbers. As with a previous project, the computational algorithms developed by Drs. Hong and Shin perform quantitative analyses of the microscopic images that are accurate and systematic across the entire array of images, ensuring reliable and objective analytical results.

The computational power of Dr. Shin’s cluster setup will enable the team to combine the data obtained from both Dr. Adams’ and Dr. Rowe’s labs to quantify bone physiology in individual animals and to compare the data across all the mouse strains studied in the KOMP. From this, they will infer how the absence of individual genes affects bone development and density.   Dr. Shin observes, “This objective, systematic quantitative approach increases our confidence level.”

Dr. Rowe notes that the speed and reliability of the computational setup is an enormous advantage.  “Unlike with visual interpretations of images by a human – which are biased – the computer can interpret the results consistently over time, and we can retrace our steps and validate the data. We can also organize this information in a database so we can go back and view exactly what the researcher saw under the microscope, what the computer saw, and how the computational algorithms interpreted the image.”

Throughout the five-year project, the team’s results will be made publicly available via the International Mouse Phenotyping Consortium (IMPC) portal, which is part of the KOMP. There, physicians and members of the bone community may easily access the information.

Dr. Rowe summarizes the merit of the project this way: “Our goal is for a researcher to be able to ask: For this particular bone abnormality, what gene or genes were implicated? In humans, for example, we know bone health is associated with multiple genes, so osteoporosis can arise when these genes are not fully functioning. From the results of our study, pharmaceutical companies may be able to design a drug that boosts the performance of the genes associated with bone development and health.”

He also notes that the project represents the first demonstration of the important synergies that exist among UConn Engineering, the UCHC and the Jackson Laboratory, and also may position the team to lead the way in establishing internationally recognized standard protocols, procedures and techniques for the evaluation of gene function on the skeleton.

“This study will blow the lid off our understanding of the influence of genes on bone growth and development,” predicts Dr. Ackert-Bicknell.