The University of Connecticut has partnered with Penn State Altoona in a collaborative research initiative, supported by a three-year, $650,000 grant from the National Science Foundation.  The project is entitled “Electro-optical studies of nanoscale, geometrically asymmetric tunnel junctions for collection and rectification of light from infrared through visible” and will study the physics of a device, called a “rectenna,” that has the potential to dramatically advance solar power technology.

The research team include 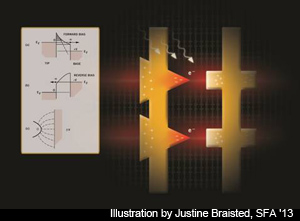 The rectenna will harness the visible portion of the solar spectrum, setting it apart from current technologies that are only capable of utilizing the infrared portion.  The rectenna will comprise a nanosized antenna and ultra-fast tunnel diodes that collect and rectify solar radiation from infrared to visible.  To manufacture such a device, the team developed a process called selective atomic layer deposition.  This process makes the fabrication of arrays of thousands of nanoscopic, geometrically asymmetric tunnel junctions possible for the first time.  The progress made possible by this research endeavor may increase solar power conversion technology efficiency, reduce costs, and create new economic opportunities.  The project will enfold research and educational opportunities for high school, undergraduate and graduate students.