The $4 million grant is part of the NIH’s program for high-risk research with potentially high rewards. It will support his cutting-edge work in regenerative engineering, a new field he has described in the journal Science Translational Medicine. 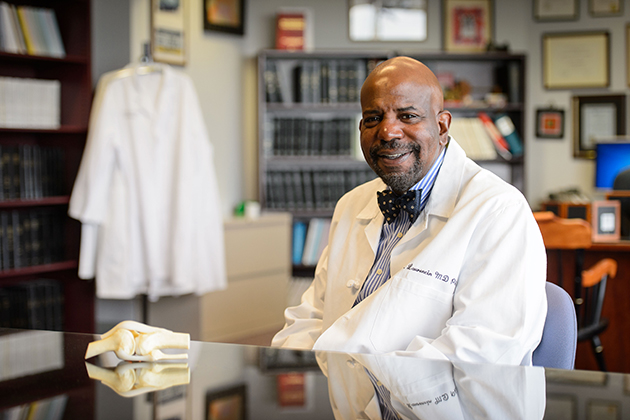 The NIH Director’s Pioneer Award recognizes an exclusive class of individual scientists whose work is deemed exceptionally creative, highly innovative, and to have the potential to produce “unusually high impact” in addressing or solving “exceptionally important problems” in biomedical or behavioral sciences. In the 11-year history of the Pioneer Award, relatively few recipients are also practicing physicians who take research findings from the lab to the bedside.
Laurencin is internationally known for developing revolutionary new ways to treat musculoskeletal injury. Last year, a bioengineered matrix he invented to regenerate ligament tissue inside the knee began clinical trials in Europe. Today he is working to bring new technologies involving regenerative engineering to regenerate entire joints, and perhaps someday entire limbs.

“If successful, this project will help usher in this new era of what we call regenerative engineering, providing revolutionary clinical solutions to millions,” Laurencin says. “Developing a new therapeutic strategy for the regeneration of complex musculoskeletal tissues and joints will revolutionize the way musculoskeletal tissue injury and wear is treated, tremendously improving the quality of lives of patients.”

Laurencin notes that his team’s work is particularly inspired by the sacrifices made by members of the country’s military who are wounded. “We hope to find solutions to be of assistance to these heroes,” he says.

Dr. Francis S. Collins, director of NIH, says, “Supporting innovative investigators with the potential to transform scientific fields is a critical element of our mission. This program allows researchers to propose highly creative research projects across a broad range of biomedical and behavioral research areas that involve inherent risk but have the potential to lead to dramatic breakthroughs.”

Laurencin is the Albert and Wilda Van Dusen Chair in Academic Medicine, founding director of UConn Health’s Institute for Regenerative Engineering, and founding director of the Raymond and Beverly Sackler Center for Biomedical, Biological, Physical, and Engineering Sciences at UConn Health. A tenured professor in UConn’s chemical engineering, materials engineering, and biomedical engineering departments, he also is the eighth faculty member in UConn’s 130-year history to hold the distinguished title of University Professor.

Laurencin, the first UConn researcher to win an NIH Pioneer Award, is an elected member of the prestigious Institute of Medicine of the National Academy of Sciences and has been named to America’s Top Doctors. In engineering, he is an elected member of the National Academy of Engineering, and was named one of the 100 Engineers of the Modern Era by the American Institute of Chemical Engineers at its Centennial Celebration.