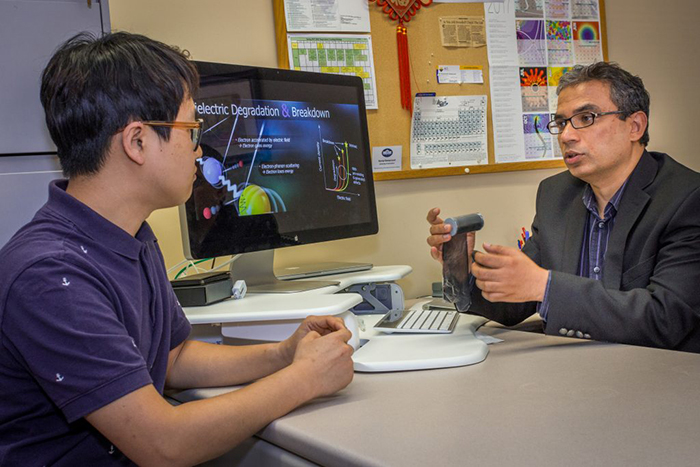 A team of researchers from UConn and other universities was recently awarded a multi-million dollar grant from the Department of Defense to learn how insulating materials exposed to very high electric fields break down.

UConn researcher Ramamurthy ‘Rampi’ Ramprasad leads the team behind “Tracking, Diagnosing, and Impeding Dielectric Breakdown in Polymers,” which received a Multidisciplinary University Research Initiative, or MURI, award. The award is for $4.5 million over 3 years, with an additional $3 million over two years possible after review.

“This program is about understanding how insulators behave when exposed to high electric fields,” said Ramprasad, professor of materials science and engineering. “If you want to design materials that are tolerant to enormous electric fields, you must first understand how they fail.” 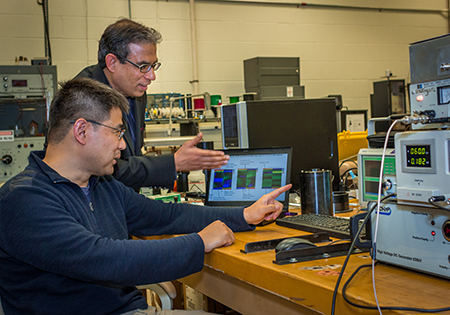 UConn researchers on this project include Ramprasad, Yang Cao, an associate professor of electrical engineering, and Gregory Sotzing, a professor of chemistry. All are members of the Institute of Materials Science. Mukerrem Cakmak from Purdue University, Michael Fayer from Stanford University, and Priya Vashishta from the University of Southern California are also members of the team.

The team will learn about the response of a variety of polymeric materials to very strong electric fields using experimental, computational, and data-driven methods, to see how the field affects the material over a wide range of length scales, ranging from sub-nanometers to microns. Ramprasad said that learning how insulators break down could eventually lead to increased efficiency for a number of important military and civilian technologies.

“The applications could be insulation that you find in electronic devices, electric cables, and most importantly, insulation in capacitor dielectrics,” Ramprasad said. “Capacitors are used in many applications, and the Navy is interested in electrostatic energy storage and high energy density capacitors.”

A capacitor is composed of an insulator sandwiched between metal electrodes. Electrostatic energy is stored in the capacitor by applying an electric field across the sandwich. One of the limiting factors in how much electrical energy a capacitor can store is the point at which the insulator breaks down and gets irreversibly transformed to a conductor – too much energy in the electric field and the insulator will fail.

Capacitors are often used in conjunction with batteries in electric and hybrid electric vehicles. A capacitor can hold less energy overall than a battery, but it can charge and discharge its energy much faster, which makes it useful for capturing and releasing energy quickly.

By understanding how the insulator in a capacitor breaks down, this research will eventually lead to materials that can result in more efficient and long-lasting capacitors capable of storing more energy than is possible today, which can lower the weight and increase the efficiency and effective range of an electric or hybrid vehicle. The military is interested, for similar reasons, to lower the weight of electric and hybrid vehicles, as well as in the development of reliable all-electric ships.

The MURI awards funding to teams of university researchers for carefully chosen and timely research topics identified for their long-term importance. This year, 23 MURI grants totaling $163 million were awarded. In addition to research, the grant funds the training of graduate students in cutting-edge technologies.

“The […] MURI supports research by funding teams of investigators that include more than one traditional science and engineering discipline in order to accelerate the research progress,” said Dale Ormond, principal director for research in the Office of the Assistant Secretary of Defense for Research and Engineering.

Over the past 30 years, DoD’s MURI program has resulted in significant capabilities for U.S. military forces and opened up entirely new lines of research. Notable examples include foundations in artificial intelligence, compressive sensing and automated scene recognition, ultracold atoms, and advanced sensing and navigation; advances in optoelectronics and mid-infrared imaging technology; and direct brain-computer communication. These and other important technological advances from the MURI program have an impact on current and future military capabilities, as well as multiple applications in the commercial sector.

This is the second MURI awarded to a team led by Ramprasad. The first, which is about to come to an end, explored new materials for use in capacitors.