The Arctic polar cap has been melting at an astonishing rate in the last 20 or so years. That makes it a region of increasing interest to industries and nations, since the decreasing surface opens up new resources and allows for new transportation and shipping opportunities. It could also mean higher sea levels and other environmental impacts. 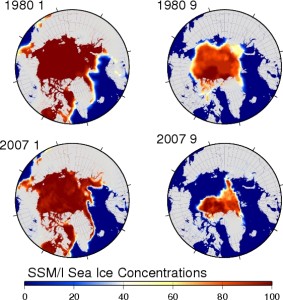 All of which means that we need to know a lot more about what’s happening in the Arctic ocean. To that end, the UnderWater Sensor Network (UWSN) Lab at UConn is developing a wireless system to collect data in the ice-covered region. The project is funded by the National Science Foundation with a grant for $833,520. The team at UWSN will be working with researchers at University of Delaware, who are interested in the sea ice changes and ocean acoustics. The UWSN Lab will design and deploy the underwater communication network, which will  wirelessly stream data – including sea temperature, acoustics and current velocity – from the bottom of the sea through acoustic waves from sub-surface ocean sensors to a control center. 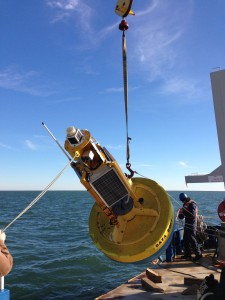 The UConn team working on the three-year project is led by Dr. Zheng Peng, assistant research professor in the Computer Science and Engineering Department. Together with Dr. Jun-Hong Cui and Dr. Shengli Zhou, the researchers will speed up the flow of information for Arctic oceanographers, acoustic communication scientists, and computer network engineers by providing data in real time from beneath the surface of the Arctic. Specifically, they will collect information on how acoustic waves form and move in the complex and dynamic region. The goal is to expand the capabilities of underwater communication networks in the area where the sea ice changes from stationary ice to mobile ice formations and then to open water. Receiving data from the sensors in real time, Peng said, is especially critical at times when corrective actions need to be taken quickly.

He expects that researchers will deploy the sensors off the coast of Thule, Greenland in 2016. It won’t be an easy task. Even under more stable conditions, deploying and sustaining wireless sensors is tricky. Keeping them powered, for one thing, is a challenge. While sensors attached to surface buoys can rely on solar energy, devices that are stationed deeper in the ocean have to rely on batteries with limited capacity.

“So we have to design our systems to be very, very energy-efficient,” Peng said. 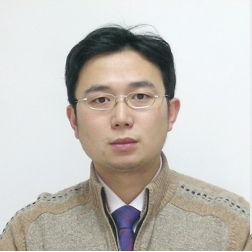 And a volatile, ice-covered region presents its own unique set of challenges.

“In the Arctic , there are more severe problems,” he said. Glaciers can wreak all sorts of havoc to the sensors’ signals. Sometimes they block the signal altogether, or boost it in unpredictable ways.  That calls for developing resilient hardware for the sensors.

More than 70 percent of the planet is water, Peng noted, and with resources on land “kind of limited,” people will eventually be going underwater to make up for that loss.

“But if we want to explore the ocean,” he said, “we have to build the network.”

Why wireless? It’s resilient, he said, and a lot cheaper.

Another advantage of wireless, he said, is its flexibility. With no prior infrastructure needed, quick deployment is possible. That’s particularly convenient when researchers identify a new area of interest and want to monitor it for a limited amount of time. Also, it can reach locations where it’s difficult to deploy underwater cable. Peng also notes that there’s also a greater return on investment because the sensors are relatively easy to recover, which makes it more likely that they’ll be used again for additional projects.