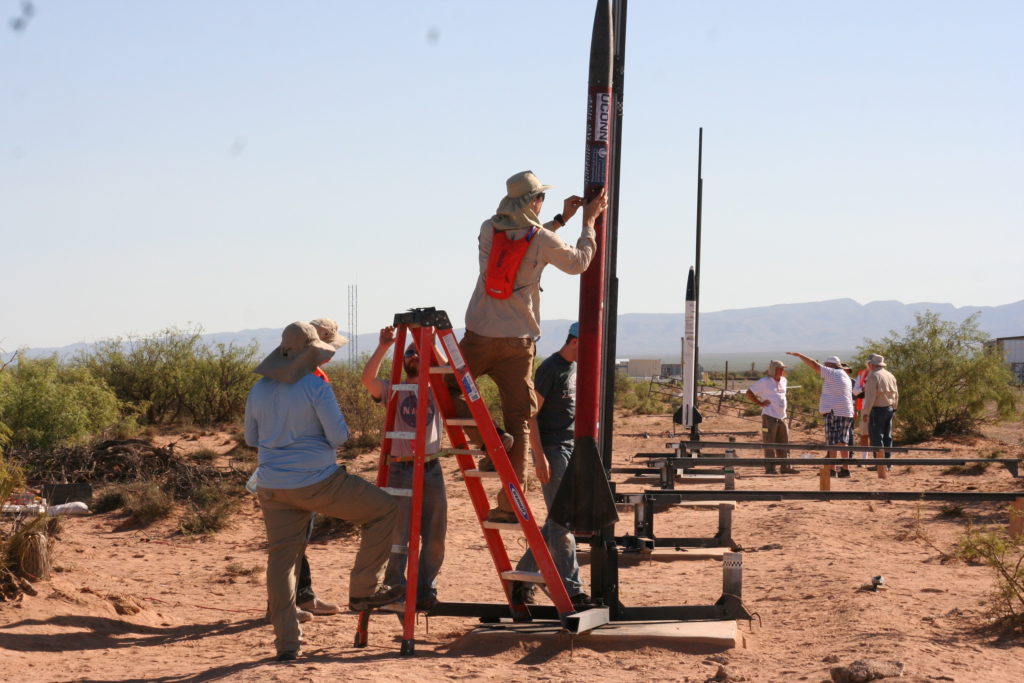 Many people dream of one day building a rocket from scratch that can reach 10,000 or 30,000 feet–University of Connecticut’s rocketry team has made that dream a reality.

The new team, which is a subset of the American Institute of Aeronautics and Astronautics (AIAA) club, was started by senior chemistry major Samuel Hamilton IV about a year ago. Since then, it has drawn in engineering majors from various disciplines.

“It was really my brainchild,” Hamilton said, “I really wanted to form a competition team, and there was a lot of red tape involved in getting our own club so we decided to go under AIAA.”

AIAA is a professional organization that is “dedicated to advancing aeronautics and astronautics and promoting the professionalism of those engaged in these pursuits,” according to AIAA’s UConntact page.

Last year, Hamilton got in contact with mechanical engineering alumni Ryan Hyatt ‘18, former president of UConn’s AIAA club, to discuss the club, and they both decided they wanted to move forward and create UConn’s own competition team.

The end goal for each year is to go and compete in the Intercollegiate Rocketry Engineering Competition, otherwise known as the Spaceport America Cup, which has two different altitude categories: 10,000 and 30,000 feet. This year, Hamilton said they are aiming to make a rocket that will reach the 30,000 feet mark, like last year.

The Spaceport America Cup is held in June every year in New Mexico and brings over 100 teams from across the globe such as McGill University, Stanford University, and the University of California, Los Angeles. Hamilton and three other club members went this past June, but they’re hoping that this year’s rocket will be a better success.

Last year’s rocket was five inches in diameter, made with filament-wound fiberglass and was projected to reach 27,000 feet. Unfortunately, there was an anomaly in the rocket that caused the main parachute to deploy at high speeds–about 600 mph or greater. This instantly shredded the entire airframe and destroyed the electronics on board, Hamilton said.

Therefore, they were unable to present their altitude to the judges and were not able to be considered for the final judging.

This year, however, they have learned from their mistakes, their team has grown, and they are ready to improve.

“Last year we only had six people, so it was all hands on deck,” Hamilton said.

This year, there are about 10 to 15 people on the team, and they are now divided into subgroups. A member of the club can choose to work on propulsion, the airframe, avionics, or the payload.

The club does not instantly jump into the creation of the main rocket, members practice on smaller scale rockets through building and test runs.

“The first couple months we’re making our own mini-rockets, and we will eventually go to work on the main rocket,” club member Liam Smego ‘22, a mechanical engineering major, said.

A lot of the club members are mechanical engineering majors, which has an aerospace concentration. Some of the members see this club as preparing them and helping them further their ME education.

Lars Gorczyca, a senior mechanical engineering major, and club member, said that the Rocketry Club is a much more hands-on experience, but in terms of fabricating and designing the rocket, he said his classes definitely helped him out.

While Smego is only in his first year at UConn, he believes that his involvement with the rocketry team will help prepare him for the rest of his coursework, especially since he wants to specialize in aerospace.

“I think it will help ground my future classes in reality,” Smego said, “I think it’s good to work a deadline and work with other people to meet it.”