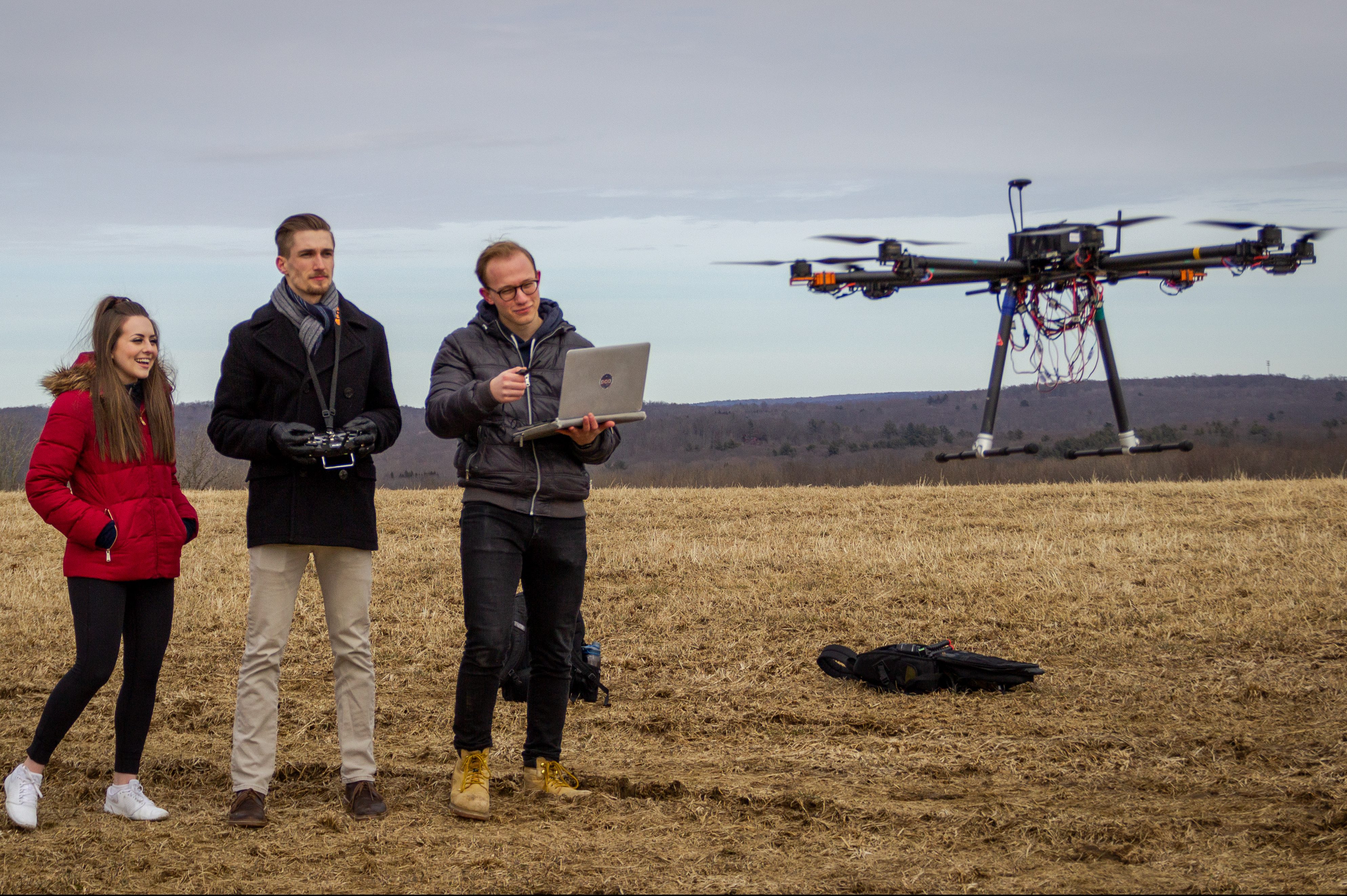 From left, Kerry Jones ’19 (ENG), Ryan Heilemann ’19 (ENG), and Josh Steil ’19 (ENG) look on as their drone takes off for a test flight on Horsebarn Hill in Storrs. (Christopher LaRosa/UConn Photo)

Working with mentors from Sikorsky, three University of Connecticut engineering seniors are translating their classroom education to the field.

“In the world today there’s a high prevalence of forest fires, like in California, but the problem is of how to safely put out these fires,” says Steil. “So our project, in essence, is to see if we can start putting out fires without a human driver.”

Once finished, the drone will carry a thermal imaging camera to identify a fire, object avoidance technology to steer clear of any obstacles, and a softball-sized fire-extinguishing ball that will be dropped over the flames. The system’s technology will be tied together through coding language developed by the students, and will operate based on inputted coordinates.

While their drone will only be able to put out a campfire-size blaze, the project is meant to prove that this technology is possible, so that much bigger technology can be engineered in the future, says Heilemann.

“The idea is that in the future, on a larger scale, there can be a fleet of unmanned helicopters that can go out and put out forest fires, thereby lowering loss of life,” says Steil.

While drones are currently used by fire departments across the country, all of them so far have a pilot who navigates the drone from a distance, and most are used for observation, not fire suppression.

“The autonomy definitely makes it different,” says Jones, “and the fire-extinguishing ball, for sure.”

Teams in previous years have worked on similar projects with Sikorsky, which provided some guidance on what has worked and what has not.

The team looked back on previous projects’ reports, including last year’s team, which was the first to integrate firefighting capabilities into the drone. While the previous team to work on this project used small thermal sensors called thermopile array sensors, Heilemann says these sensors required the previous drone to be only about six feet from the flames, which was too close for real-world applications. His team decided to use an infrared camera, which allows for more distance from the flames.

This year’s team had the added benefit of working on their project in UConn’s brand new 118,000 square-foot Engineering and Science Building, which features three engineering floors filled with faculty and labs focused on robotics, machine autonomy, and virtual and augmented reality.

At Sikorsky, the team is working with a recent UConn School of Engineering alum, Jason Thibodeau, deputy manager of Sikorsky’s Flight Controls and Autonomous Systems Department.

“He’s really helpful. We have phone meetings every Monday, and we tell him what’s going on, what we’re struggling with, and he reasons with us,” says Jones.

Adds Heilemann, “He really wants us to figure our way through issues we have, instead of just giving us a direct solution.”

Working with Sikorsky also introduced the UConn seniors to new career options. Jones has accepted an offer with Sikorsky after she graduates, in their autonomy lab as part of their Rotary and Mission Systems department.

Steil has accepted a job offer with Sikorsky’s parent company, Lockheed Martin, in Massachusetts after graduation.

“Working with Sikorsky definitely sparked a greater interest looking into the company as a whole,” he says.

Heilemann also decided to go into the aerospace industry, and has found a job doing control and diagnostics at another aerospace company.

Most importantly, the collaboration was a chance to get some experience with a top company.

“In this project, I get to learn so much about Sikorsky and what they do,” says Steil, “and having a company like that so close to home and have them be our sponsor is definitely an added benefit.”