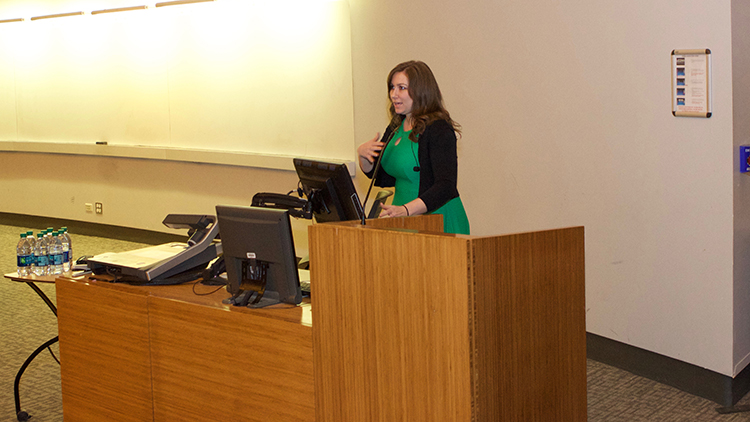 The UConn Society of Women Engineers (SWE) hosted the SWE Region F Conference on Saturday, February 25th, with a kickoff networking event the night before. Around 430 students and professionals attended the conference, which offered a number of panels designed to help navigate the start of an engineering career. This is the last Region F conference, as SWE moves from regional to local conferences.

The theme of the conference was the Spectrum of Success, which refers to the different ways a person can define personal success. Morning keynote speaker Jacquelynn Garofano (M.S., Ph.D. Materials Science & Engineering, ’09, ’12) discussed what that phrase meant to her.

“My spectrum of success is this multifaceted puzzle of what makes me me. Everyone has their own individual contributions that make you up to yourself, your community and society. For me, that includes my personal life, my academic success, my professional life and my philanthropic life,” Garofano said.

Garofano talked about her journey from attending a public school with little exposure to the STEM fields to being the first person in her family to get a bachelor’s degree, to getting a Ph.D.

“I went to a public school where we didn’t have any of these clubs or camps for women scientists. […] I didn’t really have my spark of interest in science until I took a course in astronomy my senior year of high school,” she said.

Garofano said that one of the initial difficulties for her was that she didn’t know exactly what college was going to entail, since she didn’t have a family member to ask. She also talked about how that lack of a support system for undergraduate studies can cause first in family students to have difficulty completing a degree, support that organizations like SWE can help to provide.

Karen Roth, the Director of Professional Excellence for SWE, spoke about the strong growth that the society has achieved in her time with the organization.

“I’m proud to say that today we have over 36,000 members. When I started in 2001, we didn’t even have 10,000 members. That is a huge accomplishment for everyone sitting in this room today,” Roth said.

Roth, the system security lead for the Air Force Combat Rescue Helicopter at Sikorsky Aircraft, discussed SWE’s growth into other countries as well, with 17 affiliates across 10 different countries. 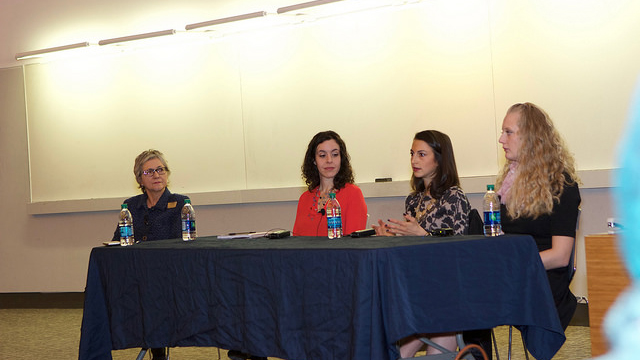 UConn Engineering Director of Alumni Relations Heidi Douglas hosted a panel about the transition from higher education to industry. UConn alumnae Stephanie Bealing (M.S., Materials Science & Engineering ’06), Amanda Card (B.S. Chemical Engineering, ’13), and Caitlin Oswald (B.S., M.S. Mechanical Engineering ’09, ’14) were a part of the panel. One question from the audience involved when to pursue a master’s degree, which the panel agreed was easier earlier in a career.

“I would say to pursue it sooner, and to get someone else to pay for it. There’s really no reason to pay for your master’s, especially in a science. UConn paid for my master’s in engineering- I had to work for it- and UTC paid for my MBA I did it before I had kids and I’m really glad I did. I don’t think I could do it now, I’m exhausted,” Bealing said.

The panel also discussed when to switch jobs.

“I’m always thinking about the next thing. The reason why I originally became an engineer is because it has such a variety of jobs. So I kind of feel like I do get to jump around and learn new things,” said Card. Card and and Bealing both agreed that after you run out of new things to learn at a position, you should at least consider moving on. 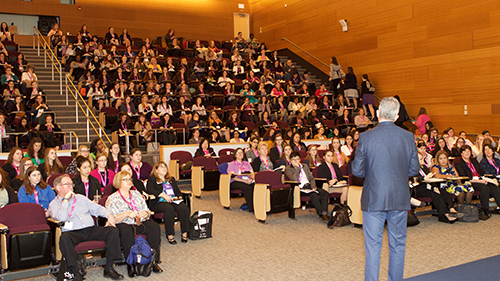 Robert Leduc, President of Pratt and Whitney highlighted the positive job market that engineers entering the workforce are about to have.

“The timing of your schooling and education is going to put you into a job market for engineers the likes of which we probably haven’t seen in almost three decades. That’s not just because of businesses that are growing, like our own, but it’s because of the demographics of the workforce,” Leduc said.

Leduc said that Pratt and Whitney currently employs 36,000 people. 25,000 will be eligible for retirement in the next 10 years, with 12,000 of those jobs in the United States and 6,000 in engineering fields, which Leduc said is mirrored in companies across the country.

At a Friday networking event, UConn English and Feminist Theory Professor Regina Barreca spoke at a networking event. In a discussion that covered a broad range of topics, she spoke about how “no woman is ever one of the boys.”

“If you go up to a woman and say ‘you’re just like one of the guys,’ she thinks that’s great. If you say you’re like other women, she says ‘No.’” Barreca said.

“Women are brought up to think we’re better than other women if we’re smart, ambitious, effective capable, efficient. That we’re not like other girls. That’s a bad trick played on women, because we need the support of other women,” she said.