For the second time in four years, a University of Connecticut student has won a prestigious Marshall Scholarship. 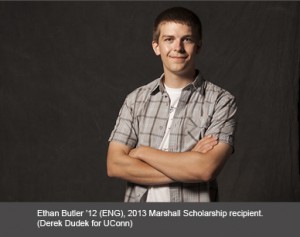 Ethan Butler, a 2012 chemical engineering graduate and past president of the UConn chapter of Engineers Without Borders, will spend the next two years in the United Kingdom pursuing his graduate studies at one, and possibly two, of Britain’s finest academic and research institutions.

A resident of Southbury, Conn. who grew up on a Christmas tree farm, Butler is one of 34 students in the United States to receive the highly-competitive scholarship this year. He is the third student in UConn’s history to be a Marshall Scholar. The others were Michelle Prairie in 2009 and Virginia DeJohn Anderson in 1976.

The Marshall Scholarship is Britain’s flagship government-funded program for American students who represent some of the finest and brightest college graduates in the United States. It is named after former Secretary of State George C. Marshall, and was established as a gesture of gratitude to the people of the United States for the assistance the U.S. provided after WWII under the Marshall Plan.