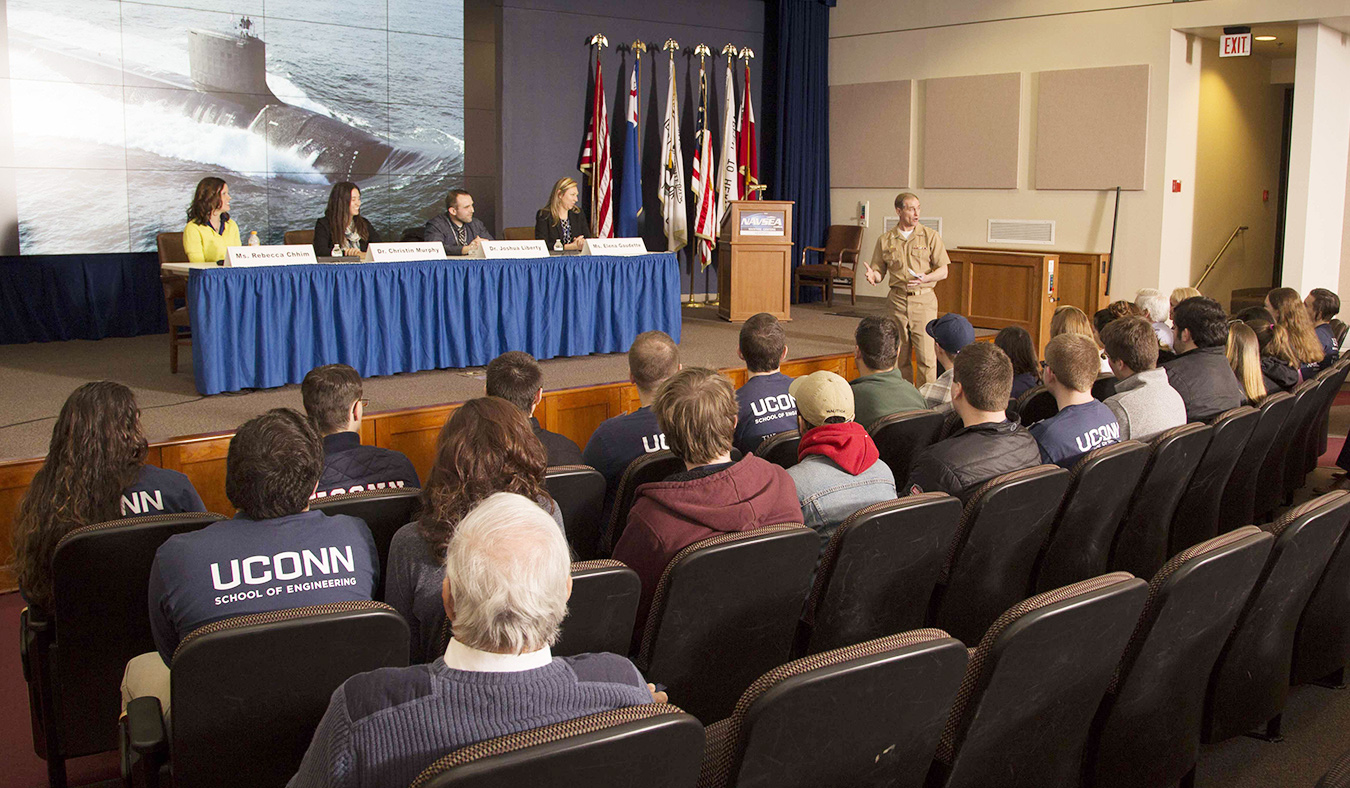 Amid a few humorous anecdotes and movie references, Naval Undersea Warfare Center (NUWC) Division Newport Commanding Officer Capt. Michael Coughlin had some sage advice for the 30 or so University of Rhode Island and University of Connecticut engineering students who visited the Division on March 23.

“Wherever you go to work, make sure the quality of the people around you is important,” Coughlin said. “Our quality of people [at NUWC Division Newport] is amazing.”

The brief meeting with Coughlin was the first stop on a tour of some of the facilities at NUWC Newport for the group of students and a few of their professors and advisors who are a part of the Office of Naval Research (ONR) STEM Outreach Workforce Development Program.

In addition to the welcome from Coughlin, the day featured a panel discussion with four engineers and scientists, a virtual worlds demonstration, a visit to the anechoic chamber and water and wind tunnels, and a tour of the Narragansett Bay Test Facility at Stillwater Basin.

“I had no idea really what they would show us, but they did a real good job of keeping me interested,” said Sofia Ricciardi, 20, a sophomore electrical engineering student at UConn. “Everything that they talked about, in some way, intrigued me.” 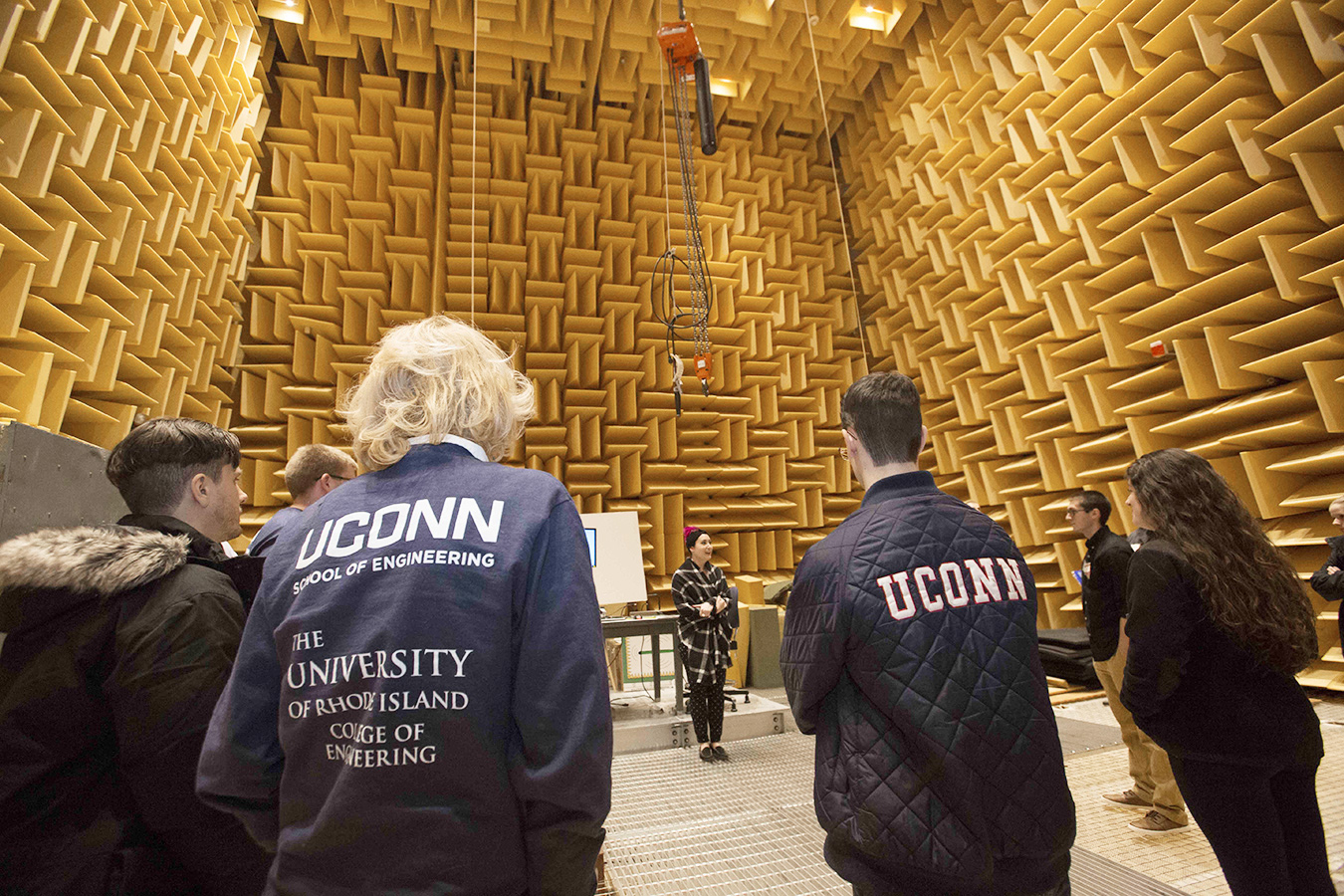 Students in the ONR STEM Outreach Workforce Development Program and ONR STEM Program Administrator Stephanie Wanne (second from left), with the UConn School of Engineering, listen to a presentation by Dr. Elizabeth Magliula (center) in the anechoic chamber at NUWC Division Newport. (US Navy Photos by Rich Allen, ICI Services)

After fielding a few questions from the audience, Coughlin turned things over to a panel that explored the wide variety of engineering work underway at the center.

“It was definitely interesting to see the people that actually work here,” Kevin Supino, 20, a second-year URI mechanical engineering student said. “They’re all really smart and very well-spoken.“They all seem very likeable and very knowledgeable, and they seem like they would be good to
work with.”

Members of the panel each spoke about their responsibilities at NUWC, which gave those in attendance perspective on the wide array of talents possessed by NUWC Newport employees.

Elena Gaudette from the NUWC Chief Technology Office discussed opportunities available to work with cutting-edge technology while also highlighting her work as director of the Advanced Naval Technology Exercise (ANTX) 2018.

“The Navy’s primary concern is to maintain superiority, and there are some formidable opponents out there,” Gaudette said.

Dr. Joshua Liberty, one of NUWC Newport’s physicists, talked about his work on the theoretical side of troubleshooting navigation issues on unmanned undersea vehicles (UUVs). He also spoke of one of the aspects he enjoys about working at NUWC, comparing it to a college campus in the sense of its structure with various departments and the building layout of NUWC Newport.

“They’re really good about moving you around and finding a good fit for you,” Liberty informed the crowd.

He further elaborated that his personal experience is that, once you get into NUWC, if you feel like you are not happy in your designated area of work, your superiors are more than willing to help you find your place. Everyone at NUWC wants to see their fellow colleagues reach their full potential, Liberty added.

Dr. Christin Murphy, a research biologist, focused on her experience looking to nature for biologically inspired technology. Her current project has her working with seal whiskers, and she emphasized the importance of collaboration in her area of expertise.

“Cross-disciplinary work is really essential in the biomimetic field,” Murphy said. “You really have to have a strong understanding of the natural world.”

Rebecca Chhim, who specializes in cybersecurity, discussed her field’s ever-increasing importance in a world where cyberattacks are becoming more frequent. She also referenced one of her “most humbling experiences,” when she was part of a team that put one of the first cybersecurity tool sets on a Virginia-class submarine. In theory, the design worked, yet logistically it impacted the daily lives of the Sailors, and she and her team had to re-evaluate their approach.

The students next moved to a demonstration on “the power of the virtual world.” “It unleashes the creativity of your workforce,” said Steve Aguiar, the head of NUWC Newport’s development of virtual worlds technologies.

In his presentation, Aguiar displayed various examples of immersive learning in which virtual worlds are utilized. He began by showing one of the first examples from a Second Life program art instructor in 2008 who used the technology to bring students inside the works of Vincent Van Gogh. From there, Aguiar showed examples specific to the Navy, including a display that demonstrated how a sonobuoy uses frequency to locate enemy submarines.

“Their virtual simulation stuff they were talking about, even though I’ve never heard of it in detail before, I thought that the way he presented it was really interesting,” Ricciardi said. “I just think it’s really cool how we’re able to ask like any question that’s on our mind, and then they answer it to the best of their ability.”

From there, students headed across the NUWC campus for tours of the center’s anechoic chamber and wind and water tunnels.

Dr. Elizabeth Magliula discussed how some people can find it “unsettling” during their first time in the anechoic chamber, which produces no echoes thanks to it being completely covered in wedges of foam. She also noted how at times people do not realize how much sound something like electronics – in this instance, the computer that was temporarily situated in the center of the room – can produce until one enters an anechoic chamber.

“I just thought it was really fascinating how all of the technology works, even though it’s not technology in the sense of circuits and things like that,” Ricciardi said. “It’s still something that had to be developed.”

Ricciardi’s classmate, Nikolai Serebriakov, 20, a sophomore mechanical engineering student at UConn, was equally impressed by some of the same technology that is utilized in the wind tunnel. “It’s really hard to think about how when you’re outside you can hear wind blowing, but when you’re in that room there’s a 40 mph wind blowing and you hear nothing,” Serebriakov said. Dr. Aren Hellum described some of the materials that have been tested in the wind tunnel – from objects made of felt to spinning propellers and even a Ford F150 – and also allowed members of the group to experience a 50 mph wind. The tunnel’s top speed is 128 mph, Hellum said.
At the water tunnel, Hellum described its capabilities and some of the experiments conducted there – including Murphy’s tests with seal whiskers.

The engineering students finished the day at the waterfront with a tour of the Narragansett Bay TestFacility at Stillwater Basin. There, they learned about the dive locker, autonomous underwater vehicles (AUVs) and waterfront operations. In the dive locker, Keith Bruce talked about the role the Engineering and Diving Support Unit plays in fixing submarines – specifically towed array handling systems – without dry docking the subs.

“The focus of the EDSU is to bring our engineering and technical skills to bear on problems that just happen to be underwater,” Bruce said.