Helping to Build a More Diverse Engineering Workforce of the Future 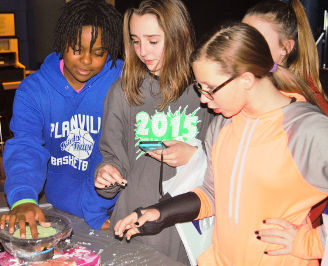 Vanessa DeJesus examined a human skull, slowly turning it over in her hands at the Connecticut Science Center on a recent November night. She was trying to figure out whether the skull was from a man or a woman based on clues a couple of biomedical engineering UConn students gave her.

DeJesus, a sixth grader from Two Rivers Magnet Middle School, was among 275 middle school students who got to interact with 75 UConn engineering students as they conducted kid-friendly experiments, such as walking barefoot over a tray of eggs and riding on a plywood hover board three inches off the ground.

“I like how the UConn students are teaching us to do things,” DeJesus said. “I like the experiments because I’m a hands-on learner. We touched real human bones.”

It was Science, Technology, Engineering, and Mathematics (STEM) night at the museum. The event was designed to engage younger students, particularly girls and minorities, in fun experiments to get them excited about engineering and the sciences. Girls and most minority groups are underrepresented in many STEM fields, particularly engineering and computer science, so the intent is to get them interested earlier.

The event was run by the UConn Engineering Ambassadors, a student service group committed to promoting Science, Technology, Engineering, and Math (STEM) education in grades K-12.

“We show them what engineering is like. We want to show them that it is not only powerful knowledge, but it’s also something that is fun and obtainable,” said Alex Choi ’16, co-president of UConn’s Engineering Ambassadors.

While the number of women and minorities earning degrees in STEM fields has risen over the past 20 years, it remains well below the rate for white men, according to the National Science Foundation.

The Engineering Ambassadors is the brainchild of Al Brockett, who served as Pratt & Whitney vice president, Engineering – Module Centers, until he retired. Brockett noticed a deficit in minority and female leadership positions, so he decided to try to engage students at an earlier age. It is important to bring more viewpoints to the table to come up with better solutions, said Kevin McLaughlin, director of Engineering Diversity and Outreach at UConn.

“Many times we are faced with solving a problem that needs to consider the larger community. When you have this type of problem, having engineers from a variety of backgrounds makes it more likely the solution will serve the population well,” McLaughlin said.

The program is underwritten by United Technologies Corp., which has been a generous donor to the UConn Engineering Department, and has given UConn students internships and jobs over the years. 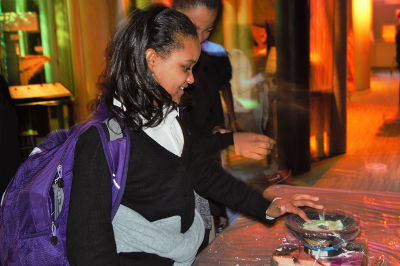 The Engineering Ambassadors reached out to the Connecticut Science Museum and, together, came up with the idea of hosting the STEM night at the museum.

After some pizza and brief instructions, the students, drawn mainly from greater Hartford middle schools, rotated through the students’ presentations and the museum exhibits.

One of the most popular experiments was the “oobleck” exhibit, where students watched a gooey mixture of corn starch and water dance around on a plastic wrapped-amplifier in time to music. When the oobleck jumped up, it briefly turned into a solid before falling back into a liquid.

“It looks like a liquid, but it feels dry,’ said Lauren Anderson, of the Carmen Arace School in Bloomfield, as she touched the green goo.

The experiment was a way to visibly illustrate sound. The sound waves cause enough pressure to give the oobleck solid properties.

“As engineering students we want to show them what you can do,” she said. “We want to plant the seed. It’s an amazing feeling just seeing their reaction and knowing that we are making a difference in their future in STEM.”

In other areas of the museum, UConn students demonstrated a homemade hover board and made a pumpkin glow green by burning a mixture of rubbing alcohol and light copper sulfate inside it. Another group helped middle school students walk over cartons of eggs without breaking them to illustrate the structural strength of the arch as seen in the shape of the egg. The key was to evenly distribute their weight in their feet as they walked over the tray of eggs.

Several other students made “elephant toothpaste.” Katie Bradley, a biomedical engineering major, mixed hydrogen peroxide, dish soap, and food coloring together in a large beaker. She swirled it around a few times and grinned as students gasped at the green foam began spouting out the top in a long, thick tube.

“The kids are very interested in it,” Bradley said.

And that is the whole idea.

“We’re trying to be a role model and mentor and show how exciting math and science can be,” McLaughlin said. “They love it. We try to help them make connections between the math and science that they learn in school and engineering and design by making it as visual as possible.”

The Engineering Ambassadors targets middle school age students to try to engage them early and give them a taste of what lies ahead in high school and, eventually, college.

“Typically math and science is you what get in middle school,” McLaughlin said. “We’re trying do fun demonstrations so we can show the kids what’s out there. When they go to high school, they can try them and find new ones and continue to challenge themselves.” 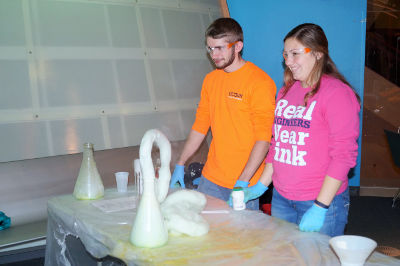 The UConn students visit classrooms in grades K-12 in greater Hartford throughout the year, bringing experiments designed to intrigue students and hook them on science, technology, engineering, and math. The Engineering Ambassadors also invite the students to campus where they give them personal tours of the Engineering Department and the university’s co-generation plant.

Aside from feeling good about making STEM seem fun and accessible, the organization has benefits for the Engineering Ambassadors as well.

“We want our students to get the experience teaching. We also want them to feel the social obligation of mentoring, especially the kids who don’t have a lot of role models around them,” McLaughlin said.

New club members go through a specially designed leadership and communications workshop to learn how to effectively communicate technical information to a variety of audiences and engage the younger students in the excitement of engineering.

This was the group’s first collaboration with the Connecticut Science Center, and it was so successful that they are already planning to hold another one in April.