UConn students majoring in materials science and engineering will have the opportunity over the next few years to work on a project that’s literally out of this world.

UConn has partnered with Duke University, the Massachusetts Institute of Technology (MIT), and Stanford University, and other student groups around the world to design, build, and launch a “Time Capsule to Mars.” The group announced its sponsors and launched its fundraising campaign with a press conference at the National Press Club on June 23. 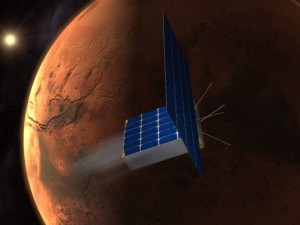 A group of students at Duke began the project after attending last year’s Humans 2 Mars Summit, where they noticed a common thread: “A lot of the presentations were focused on [getting to Mars] first, rather than advancing mankind,” says Emily Briere, a Duke student who is serving as “mission director” on the project.

So the group decided to build a “time capsule of humanity,” and encourage other students to participate. “We wanted to get students involved, get the world really excited, and test out some new technologies,” Briere says.

Since then, the project has gained a high profile: it is officially a project of Explore Mars Inc., a nonprofit organization that aims to help send humans to Mars within two decades, and advisors include Edwin “Buzz” Aldrin, the retired NASA astronaut who was the second person to set foot on the moon.

The students plan to raise $25 million through crowdfunding, charging as little as 99 cents to send a message on the time capsule, which they hope to launch in 2017. The project could be the largest crowdfunding effort in history, according to Briere.

Each student group will take the lead on a different aspect of the project. UConn students are tasked with figuring out what materials to use.

“There’s a lot of challenges with getting this to Mars,” notes Professor Daniel Burkey, associate dean for undergraduate education & diversity in the School of Engineering. “What do they build this craft out of? How do they get it to survive the surface?”

UConn’s expertise in the field – including the Institute of Materials Science – should serve the students well in this venture, Burkey says.

“It’s our job to design something, or come up with a material, that’s going to withstand the atmosphere of Mars, withstand the trip, and that’s not going to corrode or break down easily,” says Alexandra Merkouriou ’15 (ENG), president of the Material Advantage student chapter. “It’ll be a fun challenge to find something that meets all the requirements.”

The time capsule, a small sphere, could contain millions of digitally encoded messages, pictures, and videos. It will be sent on a CubeSat – a type of nano-satellite that is inexpensive and easy to build, making it a popular platform for student space experiments. The satellites are about 4 inches in diameter and weigh about two pounds, and several can be attached to a spacecraft at a time.

“I think they’re just going to hope gravity catches it and sucks it in,” he says.

If successful, the Time Capsule would be the first CubeSat flown to another planet.

Although many of the details are still in the early planning stages, the UConn students and professors who are involved are thrilled to participate.

“Regardless of whether it’s successful or not, it’s an incredible experience for the students. I think it generates excitement about engineering; it’s a positive use of science, math, and engineering,” Burkey says. “It’s very collaborative … It really is sort of a microcosm of how they’re going to work as engineers in the real world. …

“If it works, they get to say, ‘Hey, I designed something that went to Mars,’” he said. “Even if it never goes anywhere, it’s still pretty cool.”

Learn more about the Time Capsule to Mars at www.timecapsuletomars.com.