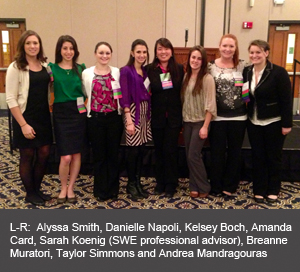 Proving once again that UConn’s women engineers are not merely gifted academically but also dedicated to advancing and supporting their peers, the UConn chapter of the Society of Women Engineers (SWE) hosted the annual Region F conference at the Storrs campus the weekend of April 6-7.

In addition to Kelsey, Amanda and Taylor, the Conference Committee included Alyssa Smith, Danielle Napoli, Breanne Muratori, and Andrea Mandragouras. They were assisted by their professional mentor/advisor, Sarah Koenig of United Technologies Corporation.  The dedicated team invested countless hours in planning and executing the conference, carefully deciding upon everything from lodging, food and entertainment to workshop topics and presenters, promotion, tours, sponsors and career fair businesses.

The conference theme of “Remember and Discover” echoed the group’s mission to create a supportive, mentoring culture aimed at helping women succeed in engineering careers and ascend to leadership positions in the engineering professions.

Three exceptional women shared their insights and experiences with attendees.  Elizabeth “Betty” Shanahan, CEO and Executive Director of the national SWE organization, spoke about the “State of SWE.” A woman engineer whose impressive 24-year career began at Data General – where she was the only female engineer assigned to the Eagle minicomputer design project captured in Tracy Kidder’s The Soul of a New Machine – Ms. Shanahan reflected upon what it means to succeed as a woman engineer.

Recalling Ms. Shanahan’s remarks, Amanda and Taylor were most impressed by her assertion that women engineers should define success on their own terms. “You decide what is success; don’t let others define it for you,” she said, noting that while some choose to define success as reaching the top echelons of corporate leadership, others characterize success as having the flexibility to put their careers on hold to experience motherhood.  The individual woman – not the workplace or societal precepts – should decide what constitutes success, she averred.

Ms. Shanahan’s message resonated among the attendees, and the larger UConn engineering population will have the opportunity to hear her speak when she return to Storrs on May 11 as the keynote speaker and Honorary Degree recipient during UConn Engineering’s undergraduate commencement ceremonies.

Taking up the thread of Ms. Shanahan’s theme, Dr. Nunes also discussed success which, for her, is rooted in a life-long commitment to building the support mechanisms and culture required for girls and women achieve their dreams in STEM careers.  Dr. Nunes noted that her proudest honors were in recognition of her dedicated mentorship of young women throughout her career.

A third speaker was Samantha Foster, an engineer-turned headhunter who is Managing Director and Global Head of the Aerospace Sector at ZRG Partners.  Taylor was impressed by Ms. Foster’s 180-degree career change, when she realized that life in a cubicle was at odds with her effusive, outgoing personality and decided to reinvent her career as a headhunter hiring top-tier engineers for industry. Kelsey and Amanda agreed that Ms. Foster’s remarks were insightful because her core message was that engineering is not a direct career path, but rather a journey of self-discovery that may involve job changes to find the right work culture and responsibilities that enable one’s individual’s personality, skills and interests to flower.

The idea of hosting a conference took hold last year when the friends attended the 2011 Region F conference hosted by RPI.  Members of UConn’s SWE chapter were impressed with the well-organized event, career fair and great turnout. Energized by the powerful messages and strong mentors they encountered at the event, the next year Kelsey, Amanda and Taylor submitted a persuasive proposal to host the event at UConn.

From then on, planning took center stage, with weekly meetings across the year culminating in this year’s conference. “Our goal for the conference was for members to attend, learn about their optional career paths and enjoy the experience.” The conference program aimed to help participants define their personal success and determine the necessary steps to achieve their goals, whether their ultimate aspirations lie in industry or academia.

Tours of the UConn water treatment plant, tissue mechanics lab, and cogeneration plant afforded attendees an insider’s view of exciting operational facilities at UConn.  Another popular event, attracting large numbers of SWE students, was the career fair featuring recruiters from top employers around the region, several of whom conducted on-site interviews with candidates and even made job offers.  Many of the companies were recruiting for summer internships and co-ops as well as full-time jobs post-graduation.

With the successful event now in their rear-view mirrors, how do Kelsey, Amanda and Taylor judge their experience? “It was awesome to know that, just as we were impressed and inspired by the conference in Boston, we were able to spark that same feeling of excitement and inspiration in this year’s attendees,” they remarked. Already, the team has received inquiries from other SWE chapters intent on hosting upcoming conferences.

The challenge to impart leadership lessons and best practices to a new cohort of UConn SWE chapter members has not been ignored by Amanda, Kelsey, Taylor and their fellow leaders. Until January, Amanda served as president, Taylor was vice president, and Kelsey was conference chair.  Now, they are training the new class of UConn-SWE officers so the momentum will continue next year. Taking the baton for the next year are president Nicole Henry, vice president Kerry McCaffrey, treasurer Emily Itzkowitz, and secretary Naomi Tennakoon.