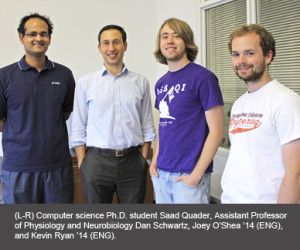 A group of researchers and students from UConn and Harvard Medical School have developed a new Web program that will help scientists visually analyze DNA and protein sequence patterns faster and more efficiently than ever before.

Called the probability logo (pLogo) generator, the program produces graphical representations of amino acids and nucleotides – the building blocks of biological molecules like protein and DNA.

The methodology for the pLogo generator was published online in the journal Nature Methods on October 6. 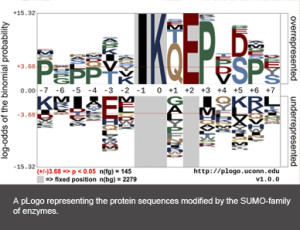 “This project represents a major goal of our lab, which is to create resources for the molecular biology research community that are user-friendly and as interactive as possible,” says Daniel Schwartz, assistant professor of physiology and neurobiology and leader of the pLogo development team.

The program is remarkable not only for the new features it provides to the scientific community, but also for the work that went into its public debut: Schwartz drew on the computational and Web development expertise of several UConn computer science and engineering students to convert his visualization strategy into the Web-based tool.