The bane of many a homeowner, the dreaded termites, may gain new respect as a source of clean energy. An interdisciplinary team of researchers at UConn and CalTech has won a $2 million grant from the National Science Foundation to explore how communities of microbes found in the guts of termites interact to efficiently metabolize wood cellulose. 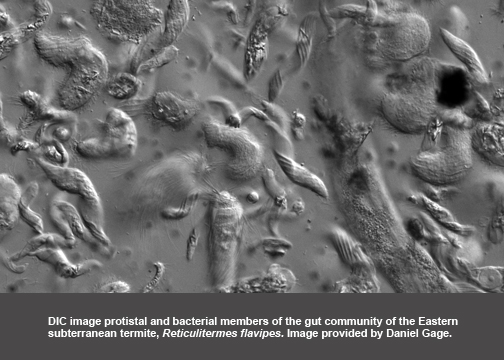 The four-year project, funded under the agency’s Emerging Frontiers in Research & Innovation (EFRI) program, may lead to novel energy applications in addition to shedding light on the complex signaling mechanisms that allow the gut community to convert wood into useful energy.

Leading the investigation is Dr. Ranjan Srivastava, an associate professor of Chemical, Materials & Biomolecular Engineering (CMBE).  His co-investigators include Drs. Leslie Shor and Bill Mustain, both of CMBE; Drs. Joerg Graf, Dan Gage and Kenneth Noll of Molecular & Cell Biology (College of Liberal Arts and Sciences); and Dr. Jared Leadbetter, professor of Environmental Microbiology at CalTech, who is an expert on termite gut bacteria.

Dr. Aleksandr Simonian, NSF EFRI Program Manager, remarks, “This is an exciting project in which investigators are learning from nature.  By exploring the complex community of microbes that lives in a termite’s gut, the researchers will exploit what they learn to develop more efficient ways to degrade woody plant materials, a critical step for creating alternative fuels and sustainable chemicals directly from plants. The team will also create some clever outreach and education activities that should engage students, teachers and the public, and make the science and engineering of the project accessible and exciting.”

The digestive tracts of so-called “lower” termites contain many different species of microorganisms. This microbial community, in cooperation with the termite host, can effectively break down the rigid, woody material in plants called lignocelluloses.  Understanding how the microorganisms work together, handling different responsibilities and responding to changes in the environment, is an important aim of the project.

In the termite gut, researchers believe microbes coordinate activities by directly sending and receiving signals among members of the community.  Dr. Srivastava and his colleagues theorize that if we can understand these signaling processes, it may be possible to manipulate these communities and harness their capabilities outside the termite gut in an artificial system.

According to Dr. Srivastava, most studies of bacteria have focused on understanding single species.  “In nature, bacteria are almost never found as single cell cultures.  We need to look at the natural environment and whole communities of microorganisms to really understand how they function.”

Dr. Gage explains, “We are interested in characterizing the communities in the gut: who’s there, what are they doing, what genes are turned on? We’re also interested in understanding a particular type of signaling.”  The NSF EFRI program has targeted inter-kingdom signaling, in this case between the animal kingdom – the termite’s protists – and the bacterial kingdom.  “While many researchers focus on chemical signaling, we are interested in the signaling that occurs when cells touch. “ Dr. Gage says.  “We know that certain classes of genes are important for cell-cell communication, and we know that those genes are turned on in the termite gut. In particular, we are interested in interactions between bacteria and protozoa: do bacteria and protists talk to each other through direct physical contact?”

In conducting the research, whole microbial communities from the termite gut will be transferred and studied in successively more complex artificial microhabitats. Dr. Leslie Shor, who also holds an appointment in the Center for Environmental Science & Engineering (CESE) at UConn, will build on her past work studying protozoa in artificial microhabitats. Here, the artificial microhabitats will mimic key features of the natural termite gut microenvironment.  For the engineering portion of the project, Dr. Shor and CMBE colleague Dr. William Mustain will work together on microhabitat design, fabrication and operation. Together, they will develop “novel ways to create chemical gradients at the sub-millimeter physical scale, like those found in real termite guts; these will be essential to the engineering facets of the project,” notes Dr. Shor.

Building an environment that replicates that of the termite gut is a challenge, according to Dr. Graf.  “It will take some time for us to identify the right set of environmental factors that supports the microbial community living inside.  The genetic makeup and dynamics of the microbes living within the natural and artificial communities will differ. To determine what these differences are, one of our first actions will be to measure changes in the community with time inside microhabitats.”

Even this goal is complex. “We really don’t know how many different microorganisms live in the termite gut, but we think there are probably dozens, and different microbes in different kinds of termite guts. Even within a single termite’s gut, there are distinct communities residing across its length, as well as from the oxygen-poor gut center to the more oxygen-rich outer edges,” notes Dr. Srivastava.

To identify the “residents” of the two communities, the researchers will catalog the genetic material found in natural termite guts and in the artificial microhabitats.   By sequencing a certain kind of genetic material, called messenger RNA, they hope to eavesdrop on signaling between bacteria and protozoa.  The researchers believe that proteins called BspA, found on the cell surfaces of bacteria and protists, are involved in a form of inter-kingdom coordination that takes place by cell-cell contact. To test this hypothesis, they will interfere with the BspA proteins and carry out a regimen of DNA sequencing techniques aimed at comparing the functioning of the microbial community in the natural termite gut versus in the artificial microhabitats.

The researchers will also try to understand, indirectly, the functions controlled by these signals. Dr. Gage explains, “We will feed the termites molecules that disrupt cell-cell communication and then assess how that impacts termite digestion and microbial physiology. Will this permanently disrupt digestion and lead to the termite’s starvation? Will the community somehow adapt in a way that allows for digestion to resume and lets the termite soldier on?”

In the modeling phase, Dr. Srivastava and his colleagues will develop algorithms that aptly reflect, and predict, the signaling network’s structure and control processes.  “Besides revealing the function of the various signaling proteins, this model will help us learn how to manipulate the signals, and perhaps ultimately enhance the in vitro communities’ production of certain byproducts that may be used in energy production,” he notes.

The team anticipates that its research will lay the groundwork for a new biofuels development platform. “Our long-term strategy is to develop an array of artificial microhabitats for use in large-scale processing lignocellulose to a biofuel or to an intermediate compound for biofuel production,” says Dr. Srivastava.

Besides involving graduate and undergraduate students in the research, the team has developed plans for an array of outreach activities, to be led by Dr. Kenneth Noll. Among the activities planned are high school teacher training programs and local radio broadcasts about the research, podcasts, summer workshops and presentations at local museums. The team plans one particularly innovative activity involving the development of an iPod/iPad application and PC video game in which users “build” a virtual termite gut microbial community,  choosing from dozens of bacteria to populate the virtual gut, feeding the community and adjusting environmental factors. The free app will be deployed in both English and Spanish.