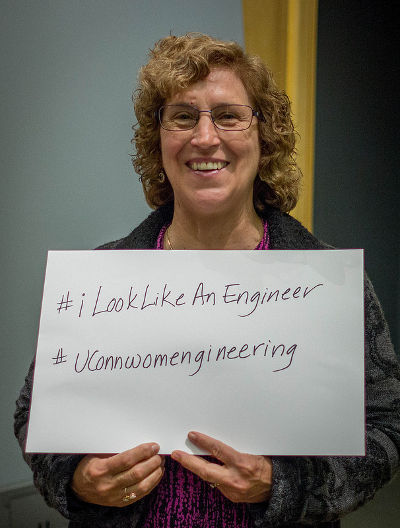 The message was loud and clear last Thursday: Women are the future of engineering.

Despite making impressive gains over the past several decades, women are still heavily underrepresented in science, technology, engineering and math (STEM) fields. Women hold almost half of the overall job market, but only about 24 percent of STEM jobs, according to the US Census Bureau.

The divergence between male and female participation in STEM fields starts early.

“When kids are young, girls and boys are equally proficient in math and science. And then something odd happens around middle school. The girls start opting out,” said Heidi Douglas, Director of Engineering Alumni Relations, symposium planner and emcee.

“If girls aren’t pursuing excellence in STEM education, then they aren’t going to make it out the other end to STEM jobs and be rising in the ranks, making it to the executive suite,” she said.

With this in mind, UConn Engineering brought together female students, professors, industry leaders and close to 100 Connecticut high school students Thursday for a day focused on reducing the gender gap and empowering women in STEM fields.

The day began with panels of women UConn Engineering students and professors and culminated in the Achieving Gender Diversity & Inclusion symposium featuring four women who have excelled in STEM fields. Each had varying messages about how to improve the STEM gender gap.

“The first thing we need to do as women in technology is say ‘Hey, there are not enough women in technology.’ What we really need to do is help each other get there,” said Jean Scire, a 1984 UConn Chemical Engineering graduate and Senior Vice President, Head of IT at Philips HealthTech Business Groups. Scire was inducted into the UConn Academy of Distinguished Engineers earlier this year. 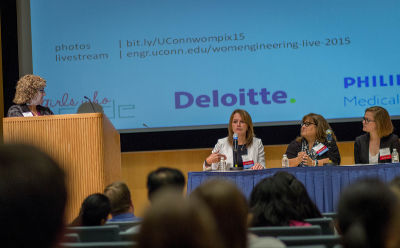 Both Scire and panelist Elvia Novak, a 1996 UConn MBA graduate and Director of Cyber Risk Services at Deloitte, agreed that confidence is a major factor to improving women’s visibility and advancement in STEM fields.

“You can’t be afraid to lean in and speak up,” said Novak. “At the end of the day, you have to be confident in the subject matter that you’re talking about.”

“The girls are not raising their hands, they’re not speaking up [in the classroom], and this carries on into the workforce,” said Elizabeth Caudle, a panelist and East Coast Regional Director for Girls Who Code, a non-profit organization that promotes computer science education for girls.

While computer science has one of the highest gender gaps across any of the STEM fields, this wasn’t always the case. The percentage of women in computer science (CS) has fallen from a high of close to 40 percent in the mid-1980s to less than 20 percent today.

Caudle blames this phenomenon on the evolution of the field. Computers were used more for “secretarial work” such as data entry several decades ago, but as computer science has become a more creative and lucrative field, men have increasingly pursued CS careers and women have not kept pace.

Another factor is childhood exposure.

“Boys grew up with experience with computer science, with personal computers, with video games, and then developed those into careers. This same exposure was never given to women at a young age,” said Caudle.

Encouraging girls to pursue STEM education was a major topic of discussion at all of the panels Thursday.

“If you’re an individual that really likes change, technology is definitely an area to be in because as soon as you learn something, it’s time to learn something else. It’s always evolving, it’s always changing,” said Novak.

Earlier in the day, four young women on the Engineering Student panel shared similar messages with the high school girls in the audience.

“Engineering is so creative,” said Kathleen Coleman, a senior Materials Science Engineering major. “It reminds me of the art classes I took in high school, my jewelry classes, my ceramics classes. To be able to take that creativity and problem solve and better the future made me want to stick with engineering.”

“I worked in military engines and I worked on the nozzle of the new F35 fighter jet- that part of the engine that twists 90 degrees and allows the jet to go up and land like a helicopter- I worked on that all summer,” she said.

All four panelists shared experiences and achievements, but they also said being a women in engineering could be challenging at times.

“A unique obstacle, especially for women, is that sometimes, you get to your classes and you feel a little overwhelmed because no one in your class looks like you,” said Genesis Quiles-Galarza, a senior Chemical Engineering and German double major. 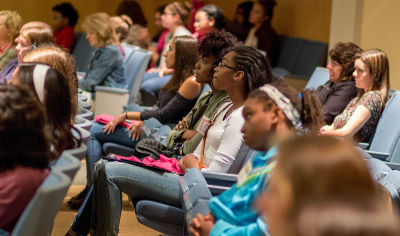 Quiles-Galarza participates in the EuroTech program that grants dual engineering and German language degrees and requires a year of study abroad in Germany. She returned from her year abroad this summer.

“When I came back from Germany, I looked around my classes and said wait, there are so many more women here than there were before I left. So it really is a growing community,” she said.

Engineering, along with computer science, has one of the highest gender gaps in all the STEM fields. The UConn School of Engineering is 20 percent women, slightly above the national average of 18 percent.

Brown also said that despite the gender gap, women feel like part of the community.

Click the link to view more photos from the event. 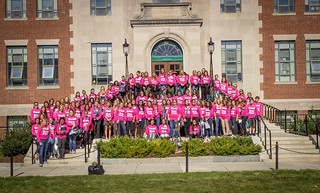