An improved heart valve that could save countless lives and a reinvention of beverage distribution are among the efforts that have come out of UConn’s popular Experiential Technology entrepreneur program, which aims to transform lab-developed technologies into commercial products and processes.

In the two and a half years since it was established, the program has spawned 12 start-up companies and trained 30 students. 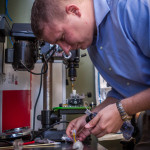 One of the most recent success stories to come out of the program comes from Dura Biotech, a company co-founded by Dr. Eric Sirois and Dr. Wei Sun. They founded the company after Sirois completed the entrepreneur program in 2012. They worked out of Sun’s UConn lab and then moved into the Technology Incubation Program (TIP) in April 2013. They now have 11 employees, all but one affiliated with UConn.

In a single week this summer, the company won two awards, each worth $400,000. One was from the Connecticut Bioscience Innovation Fund (CBIF). The second was a Federal Small Business Innovation Research (SBIR) grant. Sirois estimates that the company will need at least $10 million to get his device through regulatory approval in Europe

“We had to be very creative about how we could obtain funding and keep our costs down while we developed the technology, but now we’re funded,” he said.

The company has developed three potentially game-changing innovations: the Dura Heart Valve, a minimally invasive valve that lasts 4 times longer than other valves; the LowPro Valve, a minimally invasive valve that is 40% smaller than the competition; and VirtuTAV, a patient-specific pre-operative planning tool that aids clinicians in planning minimally-invasive heart valve intervention.

Sirois is also a veteran of the US Navy.  Shortly before he left the Navy, Sirois had to figure out what to do in his civilian life. He learned that UConn had one of the leading biomedical engineering departments in the U.S. That appealed to him, and he came to the university in 2005.

“I said ‘I want a job where I can think.’ I like analyzing systems, and I wanted to look at the body like a machine.”

During his graduate studies, he enrolled in the entrepreneur program, taught by Hadi Bozorgmanesh, professor of practice.

“I always knew I wanted to be an entrepreneur, I just figured that you have to go out into industry for 15 years or so first and then come back, but Hadi has a whole different way of looking at it: Don’t put off for one minute what you can start right now,” Sirois said. “So, we founded the company and I haven’t looked back since.” 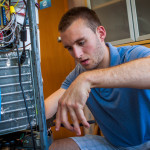 Another company that’s generated a good deal of buzz is Secor Water, a start-up founded by Matthew Cremins and Yanbing Guo. The company has designed a water cooler that customizes beverages to its users’ tastes. The machine features an advanced filtration system to purify tap water. The user has the option of carbonation and can decide what flavors and minerals will be added. A QR-code reader stores subscriber profiles.

This week, the machine gets its first real-world trial. A machine was installed in the office of a Glastonbury accounting firm.

“They’re using our machine to replace an old water cooler,” Guo said. Between 20 and 30 employees will use the machine and give their feedback about flavor, appearance, convenience and other factors.

“We’ll use that information to improve our design,” he said.

They’ve been working on it for about a year and a half. The idea was first proposed in Bozorgmanesh’s class and originally started as a group project. Others moved onto other projects, but Cremins and Guo remained set on revolutionizing the way people access and drink water. This year, they’ve expanded the team with three new employees – UConn grads Tom Wolczak and David Ritter, and current UConn student Dillon Jones, who’s now in the Experiential Technology course.

The venture also has an environmental benefit.

“The idea was to focus on a global problem, so we chose water,” says Cremins, who graduated from the program in August. “We decided to focus on the fact that every day as Americans, we consume enough bottled water to circle the Earth with bottles lined end to end.”

They’ve received about $20,000 in seed money from the Third Bridge grant. Cremins said they need about $300,000 to start in earnest.

Cremins came to UConn as an undergrad and completed the accelerated master’s program. He’s now preparing to help along the next group of budding entrepreneurs. 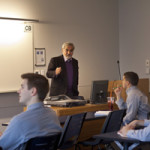 About  90 percent of technology-based start-ups fail to attract enough investors in their first three years to become a viable self-sustaining business. This difficult period is known as  the “Valley of Death.” Additionally, the program is designed to help fledgling entrepreneurs successfully navigate their way through this stage by providing viable technologies and business with mentoring, networking and “bridge” financing.

Bozorgmanesh said the program aims to develop commercial spin-offs of the engineering students’ research and create business leaders. Much of the program’s focus is on areas that often get overlooked in traditional engineering curricula, but could end up paying off significantly for the students.

“We want to create what is called ‘T-shaped graduates,’” Bozorgmanesh said. “That means they have deep knowledge of their fields but they also have emotional intelligence, leadership skills, they know finance and intellectual property, so that they can manage businesses.”

There are a few components to the entrepreneur program. One part is the Experiential Technology Entrepreneurship I and II graduate level courses, which debuted in the 2012-13 academic year. The Third Bridge program, which is funded by the quasi-state organization Connecticut Innovation, augments the course and identifies promising technologies developed in UConn engineering labs and provides early stage financing and strategies to bring these technologies to the market.

“The next step is now focusing on nurturing these start-up companies,” Bozorgmanesh said. “Out of the 12 startups, six have been awarded a Third Bridge grant this year.”