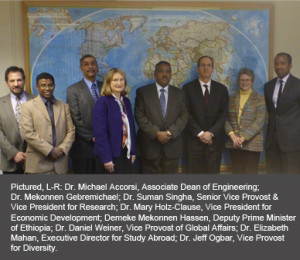 A multidisciplinary, multi-university project aimed at building a skilled workforce and educational capacity within Ethiopia’s universities in the area of sustainable water resource management has received over $1.35 million in additional funding from the U.S. Agency for International Development/Higher Education for Development (USAID-HED) to continue its work. Since its official inception in 2010, the project has received nearly $2.5 million in USAID-HED funding.

Underscoring the importance of the project to Ethiopia, in February a delegation of top officials visited UConn to meet with administrators and discuss expanded relations. Among the visitors were  Ethiopia’s Deputy Prime Minister Demeke Mekonnen Hassen and Foreign Relation and Scholarship Head Mitiku Berecha Hunde, who were accompanied by protocol and security representatives as well as family.  Top UConn officials have visited Ethiopia over the last four years, as well, to affirm the importance of the shared mission and to contribute ideas and funding toward the project.

During their meeting with UConn officials, Deputy Prime Minister Demeke noted that development of Ethiopia’s water resources and human capacity in this area is their highest priority.  The group also discussed ways to ensure the sustainability of the educational capacity-building efforts after 2015, when the current USAID-HED funding will conclude.

Commenting on the renewal of funding to the project, Dr. Weiner said “The decision by USAID and HED to renew this project, and with significant additional funding, is further confirmation of the success of this transformational initiative. The University of Connecticut is very proud to lead this effort, which is substantially building the human capital necessary for sustainable water resource management in Ethiopia.  We are also excited that there are lessons being learned that are applicable to the East African region.”

Together, the partners have developed new M.Sc. and Ph.D. programs in Water & Wastewater Treatment, and in Water & Public Health. The first class of 50 Ethiopian graduate students matriculated at EIWR in 2010 with the educational theme of Water Resources Engineering and Management. Of those students, just 20 percent were female.  The second class of 50 students includes 25 women; this cohort began coursework in 2012 under the theme Water and Health. The aim of educating a large proportion of female graduate students with expertise recognizes the disparate impact on women of poor quality and insufficient water supplies. In rural villages, in particular, the burden of providing water to families rests primarily with women and girls, who often walk long distances to retrieve water and, thus, enjoy fewer educational opportunities than men and boys.

The rationale behind graduate-level instruction is to nurture native-born university faculty and advanced-level water resource practitioners who can, in turn, share their expertise with the next generation of water resource planning and management professionals who understand the complex relationships linking  water quality and accessibility and human health.

Access to safe drinking water and sanitation facilities is a major challenge for the nation. Despite abundant water reserves fed by nine river basins – including the Nile River in the northwest – across Ethiopia: half of the nation’s estimated 85 million residents walk up to 2.5 miles daily to collect water; over half lack access to safe drinking water; agriculture is primarily rain-fed, causing food insecurity, while less than 5% of the nation’s potential irrigable land is under irrigation; 75 million have no sanitation services; only 2% of the nation’s potential hydropower is utilized; and water-related diseases such as malaria are major public health problems.

Read more about the project here and here.