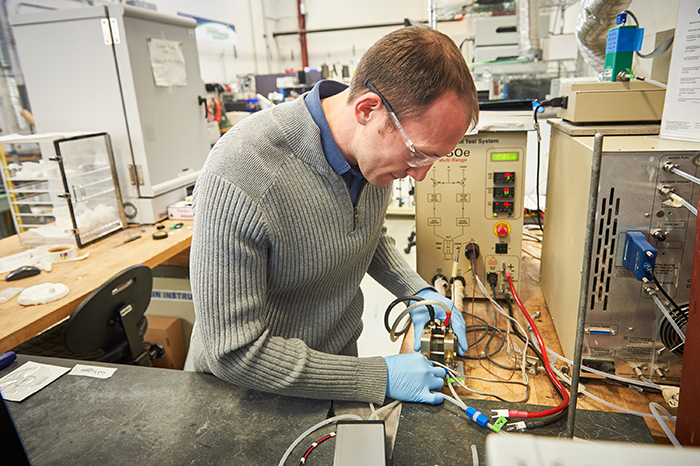 The landmark Paris climate change agreement has put renewed focus on the need for advanced technologies to help reduce greenhouse gas emissions around the world.

At UConn, William Mustain, associate professor of chemical and biomolecular engineering, is exploring new ways of capturing carbon dioxide emissions from coal- and natural gas-fired power plants that, if realized, would be a dramatic improvement over current methods.

An expert in electrochemical energy generation and storage, Mustain recently received a Fulbright Scholar Award that will allow him to ramp up his carbon capture research with Professor John Varcoe, a longtime colleague and internationally renowned expert in the field of materials chemistry at the University of Surrey, U.K. The Fulbright Award is one of the most prestigious and selective scholarly exchange programs operating worldwide. 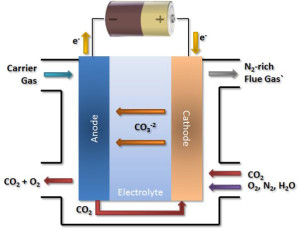 The electrochemical system Mustain is working on holds the potential to be up to 80 percent more efficient than current state-of-the-art technologies, which rely on liquid adsorbents to capture carbon dioxide in flue gases and then isolate the carbon dioxide into a pure stream by applying intense heat. Until now, however, utilities have been hesitant to adopt this process, because its reliance on heat reduces a plant’s generating capacity at rates that have been reported as high as 30-45 percent. That means a 500 megawatt power plant immediately becomes a 350 megawatt plant when it accounts for carbon purification.

“For at least a decade now, carbon dioxide has been one of those problems that has a lot of people talking but has not seen a lot of action,” Mustain says. “Some of it is political. But behind that is a real cost barrier. As much as we talk about reducing CO2 emissions, it is not really possible without having a serious cost impact on the end user.”

The system Mustain is researching uses a carbon scrubbing device that is similar in operation to a hydrogen pump or fuel cell. In general terms, the power plant’s combustion gases flow into the device so that the carbon dioxide reacts with a chemical catalyst (Mustain’s specialty) and is reduced to carbonate and bicarbonate. The carbonates then pass through an electrolyte – an electrical filter of sorts – called an anion exchange membrane (Varcoe’s specialty). There, more chemical and electrical reactions happen, until oxygen and a pure stream of carbon dioxide are isolated from the other flue gases. The oxygen is easily burned off, leaving purified carbon dioxide, which can be stored for use in other industry applications ranging from fire extinguishers and oil wells to putting the fizz in sodas.

“The real goal is to reduce the energy requirement for CO2 separation so low that you wouldn’t even notice it at the consumer end,” says Mustain. “Any process that would have the ability – and we’re talking in the next 20 years or so – to eliminate CO2 from power plant exhaust at almost no cost to the end user would be huge.”

The fact that the electrochemical reaction at the core of the process leaves largely nitrogen and water coming out of the power plant’s remaining flue gas exhaust is also a huge environmental plus. Nothing short of amazing, Mustain says.

The National Academy of Engineering has declared the development of carbon capture and sequestration methods one of its 14 Grand Challenges of the 21st Century.

Mustain and Varcoe are well suited to pursue the innovative design. Mustain’s lab has been working with carbonate catalysts for more than five years and has created the only known catalyst for the selective formation of carbonates from carbon dioxide and oxygen air streams similar to those found in flue gas.

Varcoe is a world leader in the creation of anion exchange membranes, and his research has been cited by others thousands of times.
Carbonate and carbon dioxide historically don’t play well together in low-temperature electrochemical environments, but it was Varcoe who found a way around the problem by replacing more traditional alkali membranes (which were subject to severe corrosion) with his advanced organic anion exchange membranes. Mustain’s expertise with selective carbonate catalysts, developed over years of research at UConn, was also key in making the carbonate-bicarbonate option feasible.

A 2013 recipient of the U.S. Department of Energy’s Early Career Award, Mustain is also working on the project with associate professor Michael Hickner, a membrane specialist at Penn State University, and Katherine Ayers, director of research for Proton OnSite, a Connecticut company that makes hydrogen, nitrogen, and zero air generators. Ayers will help Mustain and Varcoe build and test their prototype.

But Mustain is eager to get to England to begin closer collaboration with Varcoe. The pair have been sharing information and research results long distance for the past four years. Progress has been frustratingly slow, however, due to shipping delays and other logistical hurdles associated with being oceans apart.

“We hope to have a lot of optimization in a very short amount of time, as opposed to now, where we have these months-long cycles,” Mustain says of his forthcoming trip.

Any improvement to current technologies would be a plus. Coal and natural gas power plants continue to be the largest contributors to global carbon dioxide emissions. Because of the limitations of existing technologies, the National Academy of Engineering has declared the development of carbon capture and sequestration methods one of its 14 Grand Challenges of the 21st Century.

Mustain admits there are still some major issues to resolve on his project. For instance, the team has no idea how their device will tolerate the other impurities in power plant flue gas over the long term. The team also needs to develop more advanced catalysts and membranes to reduce the required voltage necessary for the chemical reactions to take place in their cell. Initial tests required about one volt of energy, which was way too high. The team’s goal is 0.3 or 0.4 volts, and they believe it is possible. Creating a catalyst that forms more bicarbonates, for instance, would reduce the energy draw by half.