UTC Institute for Advanced Systems Engineering (UTC IASE) – a collaboration between UConn and the United Technologies Corporation – marked its one-year anniversary with an all-day conference featuring speakers and panel discussions. 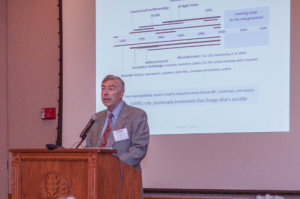 With an environment that fosters a growing academic talent base, the UTC IASE is designed to train engineers with the skills to keep pace with the accelerating rate of technology and the increasing complexity of advanced products. A recurring theme at the conference, held Nov. 10 at the Rome Commons Ballroom, was the increasing pace of technology and the need to keep up with it.

“The complexity of the next generation systems is increasing at a faster rate than we can really understand them,” said Sandor Becz, Director of Engineering, Component and System Design at United Technologies Aerospace Systems. “It really was clear that a new learning model was needed. Traditional systems engineering training wasn’t meeting the challenges that corporations face today.”

Mun Choi, Provost and Executive Vice President for Academic Affairs, said the Institute will help pave the way into the future. “We will be able delve into ever more complex problems that confront engineering,” he said. “In the process, our students will have new methods of training to the next generation of systems engineering problems.”

Michael McQuade, Senior Vice President for Science & Technology at United Technologies Corporation, said the Institute will lead not only to new and more efficient methods, but allow for things that have never been done – “to do things better, do better things.”

“It’s helping develop the new science, the new technology, the new engineering and most importantly the new human capability to allow us to pursue the new kind of systems engineering across the portfolio at UTC and more broadly across the state of Connecticut and the nation,” he said. “Partnering with UConn presents with tremendous opportunities to build that future pool of talent.”