Reprinted with permission from UConn Today.

In partnership with UTC Power, the University will begin using a fuel cell power plant to supply energy, heat, and cooling to buildings at the Depot campus in spring 2012. The project is part of UConn’s ongoing commitment to sustainable energy and a reduction of its carbon footprint. 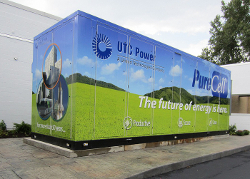 The 400kW UTC Power PureCell fuel cell system will provide clean, efficient, and reliable energy to all buildings on the Depot campus, including important research laboratories and offices at UConn’s Center for Clean Energy and Engineering and Longley Building. The Depot campus is located a short distance from the Storrs campus.

“We are very excited to work with UTC Power on this innovative public-private partnership that will bring clean energy generation to the Depot campus,” says Mun Choi, dean of UConn’s School of Engineering. “This initiative represents the first installation of a fuel cell this size in a college or university in New England, and demonstrates UConn’s deep commitment to sustainability and environmental stewardship.”

The fuel cell installation advances the University’s 2010 Climate Action Plan, which outlines more than 200 strategies for achieving a carbon-neutral Storrs campus by 2050. The plan aims at reducing greenhouse gas emissions from the combustion of fossil fuels through infrastructure improvements, new technologies, and greater use of alternative fuel sources. The plan also calls for the University to raise awareness about environmental sustainability and climate change through its daily operations and educational activities. Ongoing improvements in sustainable energy and resource conservation allowed UConn to improve its ranking on the Sierra Club’s annual greenest schools list from 49th overall in 2009 to 16th this year. University officials expect the new fuel cell to propel UConn into the top 10 on the Sierra Club’s ‘coolest schools’ list once it goes online. The Sierra Club’s listings are based on surveys sent to more than 900 schools across the country.

“This fuel cell unit represents a key component of our clean energy initiative,” says Prabhakar Singh, director of UConn’s Center for Clean Energy and Engineering (C2E2) and the UTC Professor of Fuel Cell Technology. “By installing this unit, we are going to reduce our carbon footprint significantly. And this is a great educational tool for students and faculty in terms of teaching and demonstration. We’ll be able to show and monitor the unit’s performance through dashboards that will be installed both at [the Longley Building] and C2E2.”

Based in South Windsor, UTC Power is a unit of United Technologies Corp. (NYSE:UTX) and a world leader in fuel cell technology. UTC Power fuel cells can be found in 19 different countries on six continents. The PureCell system is a combined heat and power device that can operate independently of, or in conjunction with, the commercial power grid and provides clean, efficient energy that easily meets the most stringent emissions requirements. This commercially proven system also boasts an industry-best 10-year cell stack life and an overall system efficiency of up to 90 percent, which is nearly three times that of typical central generation. A fuel cell converts natural gas into electricity and heat through a combustion-free, electrochemical process, of which the only byproducts are water and heat.

“UTC Power is proud to partner with UConn to deliver clean, efficient energy with the PureCell system and to help meet the goals of their Climate Action Plan,” says Joe Triompo, vice president and general manager of UTC Power. “We are thrilled that our fuel cell technology will power the very buildings where UConn is conducting important fuel cell research every day.”

Funding for the UConn fuel cell installation was secured through the American Recovery and Reinvestment Act and the Connecticut Clean Energy Fund, as part of the distributed generation program.

“This fuel cell will not only support the important energy-related research occurring at C2E2 but it will also be an important educational tool for UConn students,” says Bryan Garcia, president of the Clean Energy Finance and Investment Authority. “Student access to clean energy technologies such as fuel cells ensures that our graduates will be well prepared to join the clean energy workforce now being advanced across Connecticut.”

“This initiative represents the first installation of a fuel cell this size in a college or university in New England, and demonstrates UConn’s deep commitment to sustainability and environmental stewardship.”

Created by the Connecticut General Assembly in 2011, the Clean Energy Finance and Investment Authority is the successor organization to the Connecticut Clean Energy Fund. Its mission is to promote, develop, and invest in clean energy and energy efficiency projects in order to strengthen Connecticut’s economy, protect community health, improve the environment, and promote a secure energy supply for the state.

Once the PureCell unit goes online, UConn will derive power from the fuel cell, which will be served by existing natural gas lines on the Depot campus. The new energy system will result in a net reduction of about 600,000 pounds of carbon dioxide emissions per year, according to University estimates. It will reduce emissions of gaseous nitrogen compounds, sulphuric compounds, particulate matter, and other volatile organic compounds. Any excess energy produced by the PureCell system will be fed into the commercial grid.

The fuel cell will provide energy to all buildings at the Depot campus, including cooling  and heating for several large research bays in the Center for Clean Energy and Engineering and heating for the Longley Building. UConn’s Center for Clean Energy and Engineering is staffed by some of the top energy researchers in the country, who came to UConn through the state of Connecticut’s Eminent Faculty Initiative in Sustainable Energy. The initiative, launched in 2007 and jointly funded by the state and private business investment, supplied UConn with $4 million to recruit top scholars in order to strengthen the state’s and UConn’s technological leadership. Researchers at the center are advancing science in smart grid technologies, photovoltaic solar energy, fuel cells, computational modeling, advanced combustion technologies, and other areas.