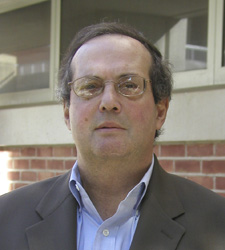 Polymers are found everywhere in the natural world, and engineering professor Bob Weiss has devoted his successful career to manipulating polymers to produce an array of useful products, from better golf balls to improved proton exchange membranes for fuel cells. In early May, Weiss will be honored by the Society of Plastics Engineers with the society’s International Award in recognition of his lifetime achievements in plastics research. “I think this is a great honor,” said Weiss. “I’m humbled by it, particularly when I consider the previous recipients of this award include the greatest names in the field.”

Among the prior recipients are Weiss’s colleague, Montgomery Shaw, and his doctoral thesis advisor and frequent collaborator, William MacKnight, now professor emeritus at the University of Massachusetts. Commenting on Weiss’s upcoming award, MacKnight said “Bob has made very significant contributions to ionomers. He has extended his research into areas I have not been involved with, including fuel cells. Bob has had an exemplary career, and this is a fitting reflection of his accomplishments. SPE strongly emphasizes applications, and this honor distinguishes Bob’s work as having merit not only on a fundamental basis but also for its improvements to the plastics industry.”

Shaw, who nominated Weiss for the award, praised his contributions and said “Bob is able to inspire people to do great things. He’s a real leader. Bob’s impact is even greater than what he has accomplished himself. With all of his obligations as a faculty member, journal editor and the like, he even finds time to mentor undergraduate students and involve them in interesting research. He has had a very big impact on the Institute of Materials Science and the profession.”

Weiss is the UTC Professor of Advanced Materials & Processing and a Board of Trustees Distinguished Professor within the Chemical, Materials & Biomolecular Engineering Department. During his 33-year career, he has contributed substantively to the field of polymer science and engineering. His research focuses primarily on ionomers, a type of polymer containing bonded salt or acid groups. His interests also span proton exchange membranes – used in fuel cells – along with polymer blends, thin polymer films, electrically conductive polymers, and hydrogels.

The word “polymer” is a Greek word meaning many parts or units, an apt description for substances akin to the beaded chain Weiss keeps on his shelf. Silk and wool, rubber, cornstarch – even DNA strands – are naturally-occurring polymers. When processed to achieve desired properties, polymers find countless applications in modern products, from use in consumer products, such as floor coverings, sunglasses, playground equipment, shoe soles and swimming pools – to military and medical products, such as bullet-proof vests, artificial heart valves and bone prosthetics. They are widely used as components in other products, such as shampoos or super-absorbent diapers.

Weiss works on the physics of ionomers, specifically their structures and property relationships. “My work involves trying to understand how to manipulate the structure to achieve specific properties. The structure of ionomers is on the nanometer scale, and diffuse, so ionomers are particularly difficult to characterize. Unlike metals and ceramics, which have well organized crystalline structures, ionomer structures are more disordered – essentially liquid-like, and thus definitive delineation of the structure is challenging. It’s difficult, or nearly impossible, to get them into a state of equilibrium, because of their very high viscosity and extremely slow relaxation times.” But these same characteristics can also prove advantageous, allowing researchers to “freeze-in” relatively stable, but non-equilibrium structures that may have useful applications.

In addition to his fundamental research, Weiss has often worked with many private companies – including Shell Development Co., Spalding/Calloway, Rogers Corp., Loctite, Northrop, Hoechst and others – to develop materials suitable for a variety of commercial applications. He has 18 U.S. patents in an array of applications, including golf ball covers.

Increasingly, he and his colleagues are turning to biomass as source materials for ionomers. These renewable materials degrade readily in the environment, unlike most plastics. “I work with materials from NatureWorks®, a collaboration between Cargill and a Japanese company, Teijin Ltd. We’re making ionomers from polylactic acid, which is derived from corn starch, as well as other monomers derived from agricultural products. Poly(lactic acid) can biodegrade over the course of months. In fact, they’re being used in the plates, cups and utensils at the 2008 Beijing Olympics.”

Polymer research has evolved significantly in the last 40 years, according to Weiss. “Nowadays, we are looking at developing super-hydrophobic surfaces. Water spilled on a lotus leaf, for example, beads up because the surface possesses nano and micro-roughness that traps air and prevents water from wetting the underlying surface. If we could build a window with such a coating, it would be self cleaning. Water would bead up on the surface and wash away dirt – providing a dirt-free surface. Or consider a military application: the military is interested in super-slippery surfaces. No one could stand on such a surface – they would fall down. This technology could be used, for example, to paralyze the enemy in a non-fatal way.”

Whatever the future of polymers, it’s clear that Bob Weiss will be counted among those at the forefront, pushing the technology to new heights.