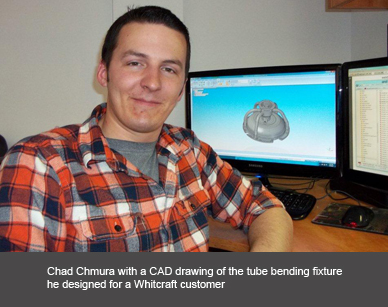 Tucked away in the Quiet Corner of Northeastern Connecticut is a mid-sized company that has been serving the world’s leading aerospace companies for decades, Whitcraft, LLC.  At the company’s Eastford facility, nearly 300 employees carry out highly technical specialty sheet metal fabrication and machining for companies like Pratt & Whitney, GE Aviation, Rolls Royce, Honeywell and other top names in aerospace.

Whitcraft is a good neighbor to the community, hiring high school and college students for co-ops and internships, and building an employment pipeline that spans Ellis Technical High School in Danielson, Quinebaug Valley Community College and UConn to fill its needs for qualified, innovative engineers.  “Our employees are world-class technicians,” says Sandy Karosi, HR Manager.

Karosi, Engineering Manager Allen Roy and a rep from sister company Connecticut Tool and Manufacturing have attended the UConn Engineering Career Fair each year since 2008.

Among the company’s valued employees are four UConn Engineering alumni, including Chad Chmura, a Junior Engineer who received his B.S. in Mechanical Engineering in 2012.

Whitcraft usually hires one or two year-round interns each year. The company recruits juniors and seniors, with the intention of hiring them after they earn their degrees.  Whitcraft has a long tradition of recruiting co-op students from Ellis Tech because “These students often have job shop experience, and that knowledge puts them much further ahead,” according to Karosi, who adds, “When we recruit interns, we look for students who have experience or hobbies that demonstrate an interest in hands-on, mechanical things, such as rebuilding an engine.”

UConn alumnus Chmura started working at Whitcraft as a junior at Ellis Tech. Though he intended to pursue his degree in the automotive program, Chmura ended up in the Machine Shop because it offered “cooler tools.”

Karosi says, “When Chad applied to Whitcraft, he arrived for the interview with pages of autoCAD sketches, blueprints of a one-tenth scale remote control monster truck that he designed and built, and other portfolio items that showed his mechanical skills. Chad had an impressive mechanical aptitude; he’s the kind of kid who taught himself CNC (Computer Numerical Control) software.”

Though Chmura was the valedictorian of his high school class, he admits that UConn was not in his sights  post-high school. “I did not envision myself coming to UConn because of the cost. But my high school guidance counselor told me of the Presidential Scholars Program the day before college applications were due, and I scrambled to submit my application in time.”

Chmura was accepted to UConn Engineering and received the scholarship which, combined with an engineering scholarship that covered the cost of his books, made UConn an affordable option. Karosi notes that after Chmura began his coursework, Whitcraft revised his work schedule to accommodate his studies. “We have a policy with our interns: school comes first.”

Throughout his undergraduate years, Chmura worked 15-25 hours/week, racing to Whitcraft after his classes concluded daily. The two experiences, along with his training at Ellis Tech, complemented each other nicely, according to Chmura.

“My pre-UConn education prepared me 180 degrees differently from students who attended traditional high schools. I struggled initially through some of my gen-ed courses, but during my junior and senior years, when my engineering courses ramped up, I was better prepared and less stressed about my classes than many of my peers.”

After his reassignment to the engineering team throughout his years at UConn, Chmura found that once his engineering courses ramped up, he was able to apply his engineering lessons and contribute more actively on large projects at Whitcraft.

One project he recalls with pride involved the design and development of an automated process for bending tubes at different angles. The French customer had been outsourcing the task to an outside vendor. Chmura designed and built a hydraulic machine capable of bending the tubes at two angles with minimal processing, enabling the customer to bring the process in-house and effectively cut production and distribution costs in half.

For their senior design project at UConn, Chmura and his fellow team members, Callan Gruber and Waleed Zawawi (advised by Dr. Jiong Tang), worked on a project involving wheel optimization for sliding glass doors. The team developed a way to test various types of load wheels — the mechanism that supports the sliding motion of the door — for Stanley Access Technologies. The team’s fully-automated test setup was able to accurately measure the rolling resistance of various types of loads while under different conditions (load, temperature, speed, direction, track surface materials) and achieve repeatable results. The project netted the 2012 Mechanical Engineering senior design competition, receiving the top $1000 prize among all ME projects.

After Chmura earned his B.S. in May 2012, Whitcraft offered him a full-time salaried job. Karosi says, “He’s doing phenomenally. He’s working on a Raytheon missile project for which he serves as lead engineer.”

Since Karosi started keeping rack, the company has hosted seven UConn Engineering interns. Two of the company’s engineers are currently pursuing their master’s degree in mechanical engineering at UConn, with tuition reimbursement help from Whitcraft.

Chmura is an outspoken advocate for Whitcraft, which he says “makes me feel appreciated.”  Furthermore, he says, Whitcraft provides an outstanding manufacturing environment because it is continually upgrading its equipment to include devices such as direct metal laser sintering and 3D prototyping machines, CAD software, laser cutting devices and other equipment. “I can’t imagine working for a better company,” he concludes.