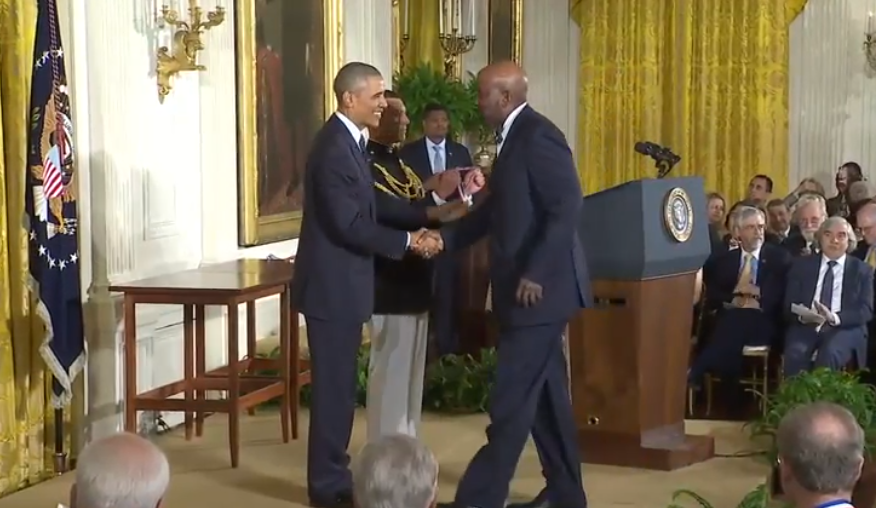 Dr. Cato T. Laurencin was honored by Pres. Barack Obama at the White House on May 19 with a National Medal of Technology & Innovation, the nation’s highest honor for technical achievement. (Credit: Whitehouse.gov).

By Lauren Woods.
This story originally appeared on UConn Today.

UConn’s Dr. Cato Laurencin was honored on May 19 at the White House by President Barack Obama with the National Medal of Technology and Innovation, the nation’s highest honor for technological achievement.

The citation of Laurencin’s award read aloud during the medal ceremony was: For seminal work in the engineering of musculoskeletal tissues, especially for revolutionary achievements in the design of bone matrices and ligament regeneration; and for extraordinary work in promoting diversity and excellence in science. 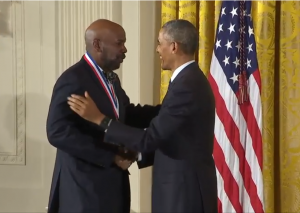 “I am honored to receive the highest award in our nation for innovative technological achievement and scientific excellence from our great country,” said Laurencin. “Receiving the Medal of Technology and Innovation is a tribute to the hard work that has taken place by our great team over the past 25 years. It inspires me to keep working hard to advance science breakthroughs in regenerative engineering for future therapies for my patients.”

Pres. Obama commented at the ceremony: “The amount of brainpower in this room right now is astonishing.” The president shared that because the medal winners, such as Laurencin, lived in an America that fosters curiosity, invests in education and values science, “They were able to find their calling and do extraordinary things.”

“As president, I am proud to honor each of you for your contributions to our nation,” said Obama.

This is the third time Laurencin has received White House honors. Previously, he was awarded the Presidential Faculty Fellow Award from President Bill Clinton for his work bridging engineering and medicine, and the Presidential Award for Excellence in Science, Math, and Engineering Mentoring from Pres. Obama.

“Congratulations to Dr. Laurencin on this prestigious and well-deserved national honor,” said Jeffrey Seemann, vice president for research at UConn. “He makes UConn so proud and continues to build upon his amazing scientific record of pioneering research discoveries to human health.”

Laurencin is a world-renowned surgeon-scientist in orthopaedic surgery, engineering, and materials science. He is known as a pioneer of the field of regenerative engineering. His work over a span of over 25 years has had an extraordinary range of depth and breadth. He has made fundamental and seminal contributions in polymeric materials science and engineering, and nanotechnology. At the same time his research successes have included the growth and regeneration of bone, ligaments and other musculoskeletal tissues. 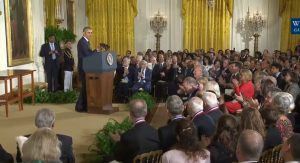 Pres. Obama at the White House ceremony honoring the winners of National Medals of Technology and Innovation (Credit: Whitehouse.gov).

Laurencin serves as the eighth University Professor in UConn’s over 130-year history. He is professor of chemical and biomolecular engineering; professor of materials science and engineering; and professor of biomedical engineering. He is also the chief executive officer of the Connecticut Institute for Clinical and Translational Science (CICATS), UConn’s cross-university translational science institute. At UConn Health, he is director of the Institute for Regenerative Engineering; the Albert and Wilda Van Dusen Distinguished Professor of Orthopaedic Surgery; and director of The Raymond and Beverly Sackler Center for Biomedical, Biological, Physical, and Engineering Sciences. Laurencin is an elected member of both the National Academy of Medicine and the National Academy of Engineering.